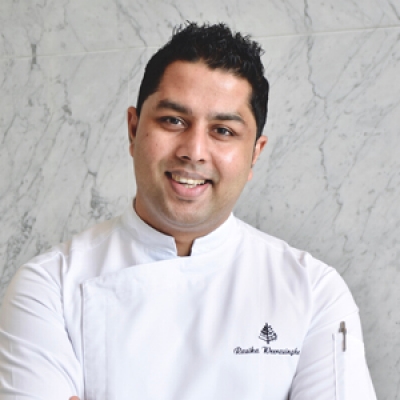 “Create with passion and creativity. Enjoy every moment of the process. You will be rewarded by the smiles of your guests.”

It does not matter where you start, all that matters is where you go. Executive Pastry Chef Rasika Weerasinghe’s journey to Four Seasons Hotel Abu Dhabi has been a long but rewarding one, filled with passion and an innate desire to explore his creativity.

Mahina was born a creative, showing a strong inclination towards the arts, which led him to explore a future as a graphic designer in his hometown of Colombo. As fate would have it, one client led him to a life in the kitchen. “I had begun to study to become a graphic designer, working on an account where I would be creating food adverts. I became obsessed and fascinated with learning every detail of how these chefs created such beautiful pastries. I then challenged myself to learn as much as possible, taking hospitality courses while simultaneously studying graphic design.”

Eventually, his love for the culinary world inevitably won out. He began working as a pastry trainee in Sri Lanka’s number one hotel the Cinnamon Grand Colombo, and the rest was history. “I knew in my heart that this was something I had to pursue, that I wanted to make my career. It was the single most important decision in my life. I feel amazed to see where I am, where I have come from, and the memories I have created.”

After completing his traineeship, he began his journey throughout the UAE working in Fujairah and Dubai before joining Four Seasons. At Four Seasons Hotel Abu Dhabi at Al Maryah Island, Weerasinghe found a home. “One of the best moves I ever made was to join Four Seasons. What has made this property so special was the management. Executive Sous Chef Christian Buenrostro and the senior leadership are always encouraging me to think outside the box, to motivate us to craft something special. They really recognise us individually, taking the time to understand our unique character, and what we can bring to the table. I can now say, we have the perfect team, one which supports and pushes each other to create magic. Our guests come back and say repeatedly, that our amenity, our dessert made their entire trip. This is deeply satisfying. I just love seeing a guest’s amazed reaction when we create a special moment for them. I am so proud to work in a place where I make lasting memories for people, whether it’s a birthday, anniversary, or weekend getaway.”

His creativity and eye-for-detail has led to an environment that produces excellence. Overseeing seven restaurants and lounges, Weerasinghe is able to express himself to the fullest with numerous concepts at his disposal. No more is this evident than Crust’s Friday Best Brunch, where he is given free rein to be as creative as possible. “At Friday Brunch, the sky is the limit when it comes to pastry. We have an abundance of sweet treats from handcrafted ice creams, custom mini-cakes, and more. I also love to play with our Valrhona chocolate centrepiece, which is ever-changing.”

Blending his passion and work-life, Rasika brings happiness into the world one sweet at a time. A true ambassador of the Golden Rule – treat others as you wish to be treated – he lives to make others happy. “I love that I can continue to amaze people with the gifts that God gave me. I plan to continue sharing lasting moments with our guests through my talents.”