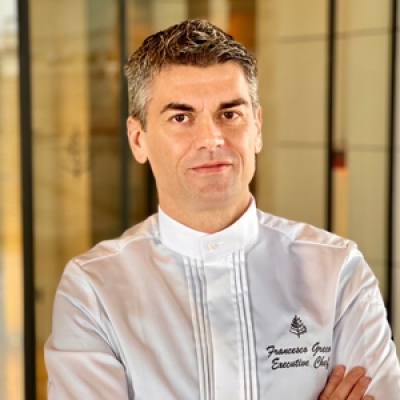 “I live by the motto of ‘do what you love with all your passion’ and I thrive on the smiles of satisfaction on guests' faces.”

A native of Milan, Italy, Francesco Greco has inherited the city’s world-renowned creativity and applied it to the art of cooking in Paris, Shanghai, Singapore, New York, Hong Kong, Jakarta, London, and now in Amman, Jordan.

As Executive Chef of Four Seasons Hotel Amman, Francesco shares his specialisation of authentic international cuisines with classic and modern techniques to guests of the Hotel.

Francesco has a wealth of experience working at some of the most prestigious hotels and restaurants across the globe and with a number of highly respected French and Italian chefs including famous Chefs Alain Soliveres and Christian Rassinoux; Michelin starred Chef Paola Budel, protégé of the famous Chef Gualtiero Marchesi; and Chef Romano Resen, a legendary chef specialising in fine dining and regional Italian cooking.

Over the course of his stellar career, Francesco has been awarded Shanghai Chef of the Year 2009 and Italian Cuisine Master Chef 2011 by GVCI group and Academia Barilla.

In his free time, Francesco likes to listen to music, watch movies and play football. However, for now, his priority is to discover the beautiful country of Jordan with his wife Sari and children Antonino and Nadia, as this is their first time in the Middle East. The first stop on their list is the Dead Sea, which is just 40 minutes away from the Hotel, but Petra and Aqaba are on the bucket list.