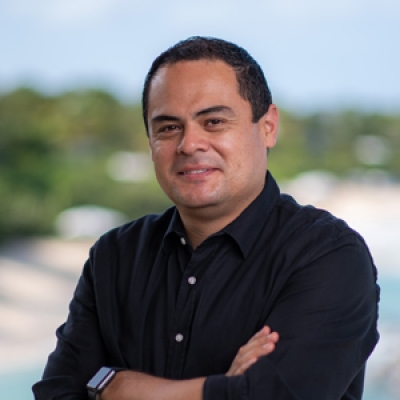 “With so many locals on staff, we have a very close connection to the community, one that we continue to cultivate with other businesses as we offer guests a uniquely authentic experience that showcases the best of the island and Four Seasons.”

“It’s good to be back,” says Diego Angarita of his return to Four Seasons Resort and Residences Anguilla as General Manager. When his previous run as Resort Manager ended in 2017, Angarita took his Four Seasons-sculpted talents north to spend three years as Hotel Manager in Beverly Hills. The city experience went smoothly and taught him a lot, he recalls – not least that he is really more suited to resorts. “I think they’re just my calling. You’re able to make great connections at a destination like this, with staff as well as guests. I just feel comfortable here.”

Angarita’s priority is making sure guests feel the same. While the beachfront beauty of the property goes a long way toward that, so too does his focus on building upon services and the spirit of the island. The vast majority of the Resort team is Anguillan, and their collective grasp on luxury standards is quite strong, he says. “With so many locals on staff, we have a very close connection to the community, one that we continue to cultivate with other businesses as we offer guests a uniquely authentic experience that showcases the best of the island and Four Seasons.”

A 20-year Four Seasons veteran when he was named GM, Angarita gets a kick out of approaching his duties like “an old school hotelier.” He prefers to manage out on the floor, be the face of the property, and make his way to the restaurants “at all the pressure-point moments” – even it’s to spend a couple of minutes with a couple of guests. “That may not seem like much, but if I can use the time to connect with people before they settle in for breakfast or a drink at the bar before dinner, I’ll take it.”

Angarita also makes a point to be approachable, something he believes “the team would say is one of my strengths.” Though fortunate to have “hugely capable managers” overseeing every aspect of the Resort, he endeavours to make himself personally available to employees. “I tell them, ‘If there’s something on your mind as you see me walking around, just stop me and ask me.’ And they do.”

Angarita was bound for the hotel industry. Growing up in the vacation destination of Puerto Vallarta along the Pacific Coast of Mexico, his father was in the business and would walk him around properties he was overseeing. “I remember him stopping to pick up trash and straighten out tables and things. Doing what it took to set the scene was a natural for him, and it became the same for me.”

Eventually, Angarita made his way to study hotel administration in Las Vegas, and as part of the program scored an internship in housekeeping at the Four Seasons property along the Strip. After graduation, he launched his career with the company in Punta Mita, Mexico and worked his way up at various properties throughout North America.

Angarita’s turn at Four Seasons Hotel Los Angeles at Beverly Hills came when the hotel received its coveted Five-Star rating from Forbes Travel Guide, and his promotion to lead Anguilla coincided with the Resort’s reopening and introduction of Lead With Care, the company’s global health and safety initiative.

“As a GM, your first reaction is to get close and connect with the team, but I had to spend my first two weeks here in a hotel room, and when it was over we rolled right into our busiest time of the year. I was like a fish out of water for a bit, but now we all have our eyes on the same goals for the resort.”

The same can be said for life on Anguilla. Angarita’s wife Alicia was born in the Bahamas and grew up in Trinidad, and their beloved rescue dog Ulu, a boxer/shar pei mix, was adopted in Hawaii – so the islands are where they belong. “I spend my downtime with my wife and my dog, who we both adore. With its culture and its beauty, the island offers a lifestyle we all enjoy.”