Located in the region where Europe meets Asia, Baku is one of the most fascinating cities in the world. On the shores of the Caspian Sea, the city has an ancient history and presents a world of rich cultures. Every corner of it fascinates and attracts with its beauty in the perfect combination of old and new Baku. It is said that everyone who visits this amazing city leaves a little piece of his soul here. Baku is rich with architecture, outstanding monuments, numerous museums and green spaces.

Now, the Concierge team at Four Seasons Hotel Baku invites everyone for an unforgettable and relaxing journey through the most beautiful parks in Baku.

Today Baku has a great variety of welcoming parks located in various parts of the city and Absheron’s suburbs. Each of these wonderful parks and gardens offers attractions, playgrounds and gardens. People come to enjoy fresh air, play sports, spend time with friends and family and just get away from the busy city.

Here are the team's recommendations for Baku’s most famous parks and squares, with the history of each:

Baku Seaside Park (or mostly known as “The Boulevard”) is a lovely park that lies along the Caspian Sea. Being one of the major attractions of Baku, it has dozens of different attractions such as music fountains, cafes, carousels, open-air cinema, a ferris wheel and even a small “Baku Venice” that consists of artificial narrow channels with boats and gondolas. The International Mugham Center and the famous Azerbaijani Carpet Museum are also located on the Boulevard.

One of the oldest parks in Baku is named after the medieval classical poet Khagani Shirvani, but is mostly known as Molokan Garden. This is because in the 19th century, it was the place where Russian Molokans used to stay, bringing goods from different regions.  In the centre of the garden there is a curve-shaped pool with The Three Graces sculpture of three young women, which is the most famous landmark of the garden. There is also a big children’s playground with swings and slides and a large café-restaurant.

Intersection of Bulbul Avenue and the Fizuli Street, Baku

Located in the city centre, this architectural complex was opened on the day of 82nd birthday of the national leader Heydar Aliyev. The park has fountains in the form of eight-pointed star – the national symbol of Azerbaijan. Flowers and green lawns were brought from Holland. The park often hosts events, most significantly the annual Festival of Flowers that starts on May 10. Behind the Heydar Aliyev Palace there is another large park complex – Winter Garden. The interesting fact about this park is that an 18-ton house was moved 10.6 metres (35 feet) away from its original position during the expansion of the territory for the park complex.

The name speaks for itself as this park boasts a great number of fountains, and it is the first urban square of Baku. It is surrounded with monuments of architecture belonging to the 19th and 20th centuries, such as Nizami Museum, as well as with a number of sculptures of urban residents, installed as decorative elements.

One of the oldest parks in Baku got one of its names – the Governor’s Garden – because of its position in front of the former Governor’s House. It was designed in the 1930s and for many years, access to the park was limited for ordinary citizens while noble people, oil millionaires and high society representatives could visit the garden any time. The famous State Philharmonic and the House of Poets are located in this park. The interesting fact is that today numerous parrots, atypical for the fauna of Azerbaijan, live in the trees of the garden.

This welcoming park is full of flowers, trees and greenery and has many interesting stone sculptures. There is also a restaurant named for the park, where one can enjoy delicious Azerbaijani, Turkish and European cuisines.

Neftchilar Avenue (by Funicular), Mehdi Huseyn Street (entrance from the Alley of Martyrs)

This unique park has an amazing open area with a magnificent panorama of the whole city. It was completely renovated in 2013 and became even more beautiful with new set of waterfalls, landscape works and ornamental plants. The park can be reached via Baku Funicular or with wide stairs.  The Upland Park also houses the Alley of Martyrs, where the victims of Black January of 1990 and soldiers killed in Karabakh War are buried.

Neftchilar Avenue (by Funicular), Mehdi Huseyn Street (entrance from the Alley of Martyrs)

The park was opened in 2011 and is located in the Old City. In the centre there is a statute of the artist and founder of the national art of caricature in Azerbaijan, Azim Azimzade, who was among the active founders of the Baku Art School.

This garden is not intimate, with its main attraction an original monument to the poet Aliagha Vahid, which was first installed in 1990 in the Philharmonic Garden and later moved to the Old City. Aliagha Vahid was born in carpenter’s family in Baku. The uniqueness of the monument is that hair of the statue is made of small sculptures of characters from Vahid’s poems and ghazals.

This delightful park, formerly known as Square of 26 Baku Commissars during the Soviet period, in located in the centre of the city. It was the place where famous revolutionaries were buried in a mass grave. After the collapse of the Soviet Union, the memorial was disassembled and turned into a park. The park is surrounded with historical buildings and one of them is the Azerbaijan National Library named after M.F. Akhundov, which has one of the world’s richest collections of books.

Founded during WWII, this park is one of the oldest in the capital, and it was reconstructed in 2011. In this scenic park one will find a majestic stone fountain, a number of bronze statues and swan sculptures. Officers Park has a lot of rides, slides, carousels and swings lined with soft coverings for children. The park also has an indoor ice skating-rink and the unusual Ice Café.  The abundance of greenery and flowers will give a spring mood to everyone who visits this amazing place.

It is one of the largest parks in Baku. It has an artificial lake where visitors can rent and ride catamarans, a lot of greenery and a modern lighting system. At the centre of the park there is a monument to Kitabi-Dede Gorgud - epic stories that reflect the patriotism, heroism, wisdom and traditions of the Oghuz Turks.

Shalala Park (which means “waterfall park”) is very green, bright and shady. Being one of the favourite places for couples, this park has a lot of fountains, flowers and even an artificial river with glass covering. Newly married couples take walks on their wedding day in this park, taking pictures and videos.

Recently reconstructed, this park is named after Azerbaijani writer Huseyn Javid. The renovation applied a synthesis green spaces and water systems to ensure isolation of sound and preserve the ecological balance.

The park is quite big and green, with several fountains including a musical fountain 50 metres long and 15 metres wide (165 by 50 feet). It has a number of cafes and a children’s play car rental facility. It is a great place for everyone to relax and enjoy fresh air.

It is one of the central squares of the capital. It was founded in the early 1920s and is named after Azerbaijani poet-satirist Mirza Alakbar Sabir, whose statue is in the centre of the square. Sabir Square is very green. One side of it borders with the fortress wall of the Old City, and lovely golden fountains makes this square even more attractive.

Botanical Garden of the Academy of Sciences of Azerbaijan has thousands of different trees and plants in both open and closed areas of the garden. It was established in 1935 and currently has a collection of 125 species of rare plants of Caucasian flora, included in the Red Book of Azerbaijan and the countries of the former Soviet Union. The recreation forest, aquatic plants and plenty of gorgeous flowers and trees make this place magical. Entry fee required; open daily from Monday to Friday from 9:00 am to 5:00 pm

The square is located in the centereof the city in front of the Nizami Ganjavi National Literature Museum. It has a huge six metre (twenty foot) bronze statue of Nizami, and was opened on the occasion of the 800th anniversary of the great poet.

This small park was named so because the fountain in the middle is quite similar to the flowers of white lilies. Here you can sit and have a rest in the shade of trees admiring the views.

This small but very nice park was recently renovated and became even more welcoming and attractive. Students and school children come here to relax and spend time with their friends. There are several modern fountains as well as a music fountain with multi-coloured lights and music.

This cute garden has a monument erected to the Azerbaijani writer and philosopher M.F. Akhundov. The park has comfortable benches, flower beds and original lanterns. Akhundov garden is surrounded by historical buildings, one of them originally belonging to oilman D. Mitrofanov, which was completed in 1903 and has under-balcony decoration in the form of dragons. 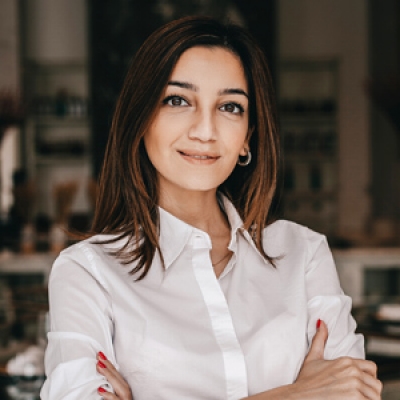