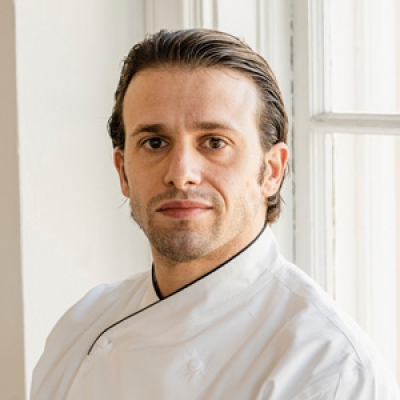 “Being a professional pastry chef allows me to combine my passions for art and cooking, and express myself in creative ways.”

Menicucci grew up surrounded by art, culture and food in Florence, Italy, and cooked in a restaurant owned by his parents. While attending the Art Institute of Florence, he realised, “Instead of painting and graphics, I could express myself artistically through pastry - especially through fine dining and plated desserts. I also really enjoy the chemical and mathematical approach to the laws of pastry.” Upon graduating, he took this creative mindset to work at several Michelin starred restaurants, before joining his first Four Seasons hotel in Maui of November 2018. Now in Beverly Hills, he sparks the curiosity of guests by pairing simple flavour profiles with modern pastry techniques and presentations.

Always ready to try something new, he also leans on what is known to pair well. “Pastry is very scientific and precise. Every flavour you touch can assume different forms, textures and consistencies, and that allows me to be exceptionally creative. You can create a dessert with 15 components, but only 3 flavours simply by altering the texture.”

The Hotel's discerning clientele can expect to see this in Menicucci’s creations from the amenity program to the viennoiserie options and plated desserts served in THEBlvd. And ever the social media guru - Menicucci can be found @riccardo_menicucci - he knows there needs to be that additional “wow factor.” But he says he won’t be compromising the flavour and the meaning of the dish. Instead “I will always seek to find a balance between flavour, look and honouring the brand.”

Menicucci hopes to remain curious and creative throughout his career, and also takes his role as a leader and a mentor seriously. “I want to give all of my knowledge to the pastry team, help motivate them, and help them grow as chefs,” he says enthusiastically.

Menicucci accepted his position in Beverly Hills with great pleasure. A fitness and outdoors enthusiast who loves hiking, CrossFit, and surfing, Menicucci can be spotted on his days off riding his motorcycle around town, or with his dog Winston, an American golden, hiking the Hollywood sign.