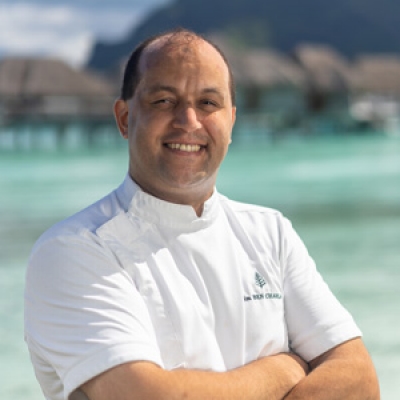 “It is said that variety is the spice of life,” says Slim Ben Chahla, Executive Sous Chef of Four Seasons Resort Bora Bora. “I couldn’t agree more, and I’m very proud of the variety of memorable dining experiences we offer our guests here in our little paradise.”

A native of Hautes-Alpes, Gap, France, Slim is still inspired by his mother, as he was in his youth, learning to cook with her. He later learned that his grandfather was a cook in the army, much to his surprise. The quintessential team player, Slim can often be found jumping in to train and help various teams within the kitchen – from in-room dining to dishwashing, even serving food.

Slim earned his culinary chops working as an apprentice, kitchen helper and station chef at some of France and Monaco’s best restaurants, under the direction of many a Michelin-starred chef. In 2007, he made the move to Marrakech, where he spent the next 11 years in roles as chef and executive chef at various establishments, including La Maison Arabe and Ksar Char-Bagh, a Relais & Chateaux Hotel. From there, Slim journeyed to the ski resort of Courchevel, France to open Aman Le Melezin, then back to Marrakech at Grand Casino La Mamounia. He joined Four Seasons in 2017 as Acting Executive Chef during the pre-opening and opening of Four Seasons Hotel Tunis, before a stint in Abu Dhabi, UAE as head chef of the French restaurant at the Shangri-La Hotel, Qaryat al Beri. Slim rejoined Four Seasons in 2019 as Executive Sous Chef of Four Seasons Resort Bora Bora, where his talents and creativity shine as bright as the Polynesian sun.

A graduate of Lycee des Metiers Sevigne, with a degree in culinary production and organisation, Slim speaks English, French and Arabic. When not working, Slim enjoys playing volleyball and handball, reading and cooking, of course.