Four Seasons Hotel Montreal set to open in 2019 as an architectural icon in the city’s vibrant downtown core
Toronto, Canada 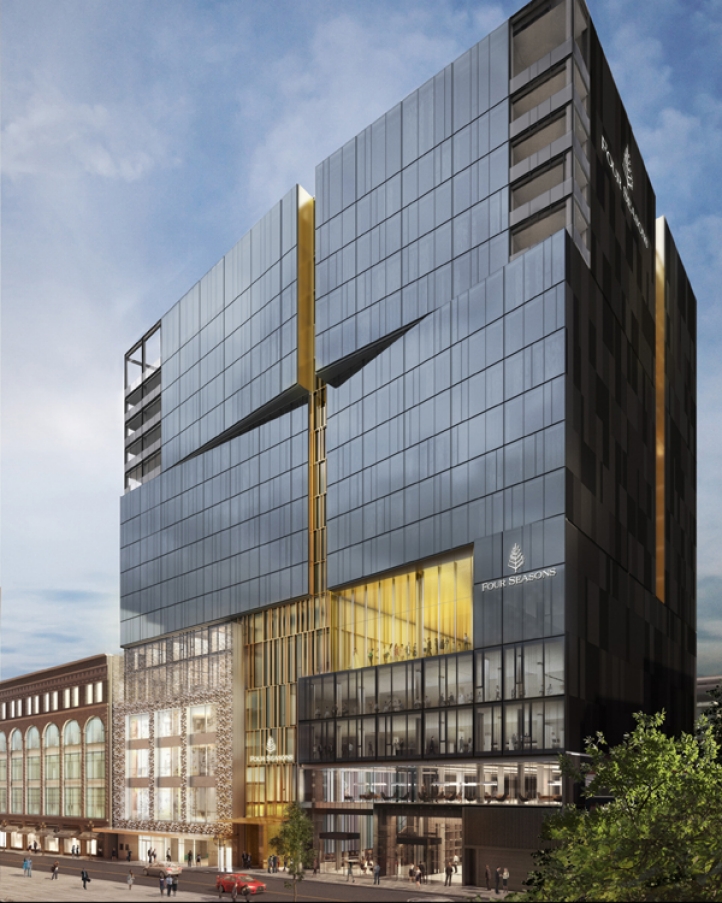 Four Seasons Hotels and Resorts, the world’s leading luxury hospitality company, and Carbonleo, Quebec’s premier property development and management company, today announced plans to build a Four Seasons hotel and branded private residences in the heart of downtown Montreal. The city’s unique cultural mosaic and international acclaim as North America’s most "European city" has made Montreal one of Canada’s most popular destinations for business and leisure travel.

Four Seasons Hotel Montreal will be part of a luxury mixed-use development located in the city’s iconic Golden Mile Square, just minutes from both the financial and commercial districts as well as the cobblestone streets and modern art galleries of Montreal’s Old Port, and a 20 minute drive from Pierre Elliott Trudeau International Airport, making it the perfect destination to welcome business and leisure travellers from around the world.

“Montrealers have been waiting to see how de la Montagne Street would evolve, and we’re very proud to be part of this unique project while contributing to the revitalisation of this downtown area. Our vision is to create an architectural ode to extraordinary urban living that will help redefine Montreal’s famous Golden Square Mile,” said Andrew Lutfy, chair of the board, Carbonleo. “This will become an exciting lifestyle and dining epicentre for both Montrealers and visitors, linking the Bell Centre to the museum district in the heart of the action. We’re thrilled to be partnering with Four Seasons, who share our desire to bring an unparalleled experience to this renowned destination, all with a unique Montreal flavour.”

“Montreal is one of North America’s great cities – a vibrant urban destination that has long appealed to luxury travellers drawn to its European flair and cultural sophistication,” said J. Allen Smith, President and CEO, Four Seasons Hotels and Resorts.

“In partnership with Carbonleo, we are bringing Montreal a landmark luxury hotel and private residences that will soon be the city’s address of choice,” continued Smith. “We look forward to introducing visitors and locals alike to the highest standards of quality and the most genuine and personal service - the markers of a Four Seasons experience the world over.”

The Hotel and Private Residences will be connected to the celebrated Ogilvy’s department store, one of Montreal’s most historic high-end retail buildings, offering some of the city’s finest luxury shopping and creating a true luxury ecosystem in the heart of downtown Montreal.

Carbonleo is a private Quebec-based property development and management company. Its mission is to create vibrant environments that offer visitors an unparalleled lifestyle experience. Inspired by top creators and by world-class best practices, Carbonleo develops projects that fulfil the aspirations of present and future consumers. Founded in 2012, the company employs more than 40 people and provides its clients with its unique expertise. Its various projects include Quartier DIX30, as well as Royalmount and Four Seasons Hotel and Private Residences.