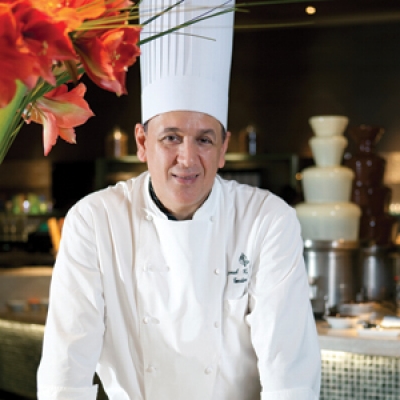 Executive Chef
“Life’s so much more comfortable when you are doing a job from the heart.”

Sitting in his industrial engineering classes in his senior year at university, Ahmad Sleiman’s mind would wander to what he was going to cook that evening and how the plate would look. Working as a chef to fund his studies, he soon realised his studies were a waste of time: “I thought, ‘What am I doing here? I’m already in the job I love.’”

Although he was raised in the United States, Sleiman, executive chef at Four Seasons Hotel Riyadh, thanks his mother’s Middle Eastern ways for his dedication in the kitchen. “I so admired her passion for cooking,” he says. “She’d spend half a day every day preparing couscous from scratch or stuffing cabbage leaves. I was raised around this. It was the culture.”

Prior to joining Four Seasons Hotel Doha for the first time in 2004, he had been away from the Middle East for more than 20 years. Returning to the region was a little strange: “I’d been away so long, I was thinking and dreaming in English. In the United States, ‘Oriental’ is Asian cuisine; in the Gulf, ‘Oriental’ is Arabic cuisine. I had to learn to think like a Middle Eastern person again.”

Sleiman loves the way his role puts him in contact with “every nationality you can think of.” He likes getting authentic input from his multinational team and can converse in five languages: “Languages open you up to learning more about the culture. That’s the coolest thing about travel to me.”

His hobbies include beach volleyball, reading and keeping up with current affairs. Since the birth of his son Hamza in January 2009, he is more conscious than ever of the importance of a healthy work/life balance. “You could put a million pounds in my pocket and I could not feel the same as seeing a guest really happy, having really enjoyed a dish,” he says. “But when my work here is done, my children need their daddy.” It doesn’t get more balanced than that.