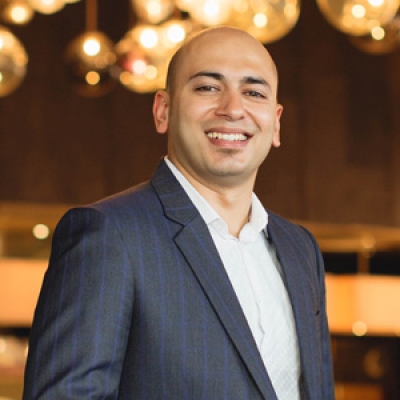 “To witness Chef Nobu at work, not only as a celebrity but also as someone who genuinely enjoys cooking with his staff, knows your name, and small gestures like this, is a truly humbling experience, and one that has set the tone for my career.”

As the General Nanager of the world’s largest Nobu, no two days are exactly alike for Gaurav Khanna.  Overseeing operations of the three-story, 26,000 square-foot (2,400 square metre) architectural masterpiece is no easy feat, but as Gaurav proudly notes - it’s a humbling experience not to be taken lightly.  “Working at Nobu Restaurants, let alone being at the helm of Nobu Doha as the General Manager, is any food and beverage aspirant’s dream,” says Gaurav. “The philosophy of the brand, the strong bond amongst the international Nobu family, and our team’s passion towards what we do, combined with the equally aligned culture of Four Seasons, makes working here an ever learning experience.”

As General Manager, Gaurav is responsible for overseeing all restaurant operations, which includes a 192-seat interior dining area, two private dining rooms, multiple lounges and catering operations.  Additionally, he is at the helm of recruitment, training and development to continue Nobu and Four Seasons leading service cultures.

Gaurav brings ovmore 10 years of international five-star hotel operations and restaurant experience to Nobu Doha and Four Seasons Hotel Doha.  Prior to being appointed General Manager of Nobu Doha, he most recently served as Assistant General Manager of the award-winning restaurant and was part of the pre-opening team, which garnered worldwide attention for the restaurant.  Under his leadership direction, Nobu Doha has been recognised as Restaurant of the Year by Food and Travel Arabia, Best Japanese Restaurant by Time Out Doha, and Best Japanese Restaurant by Fact Magazine.  Before making the move to Doha, Gaurav held the position of assistant general manager at Nobu Dubai, where in addition to overseeing the day-to-day operations, he successfully headed the highly coveted Nobu pop-ups held annually at Mazagan Beach & Golf Resort in Morocco.  Similar to Nobu Doha, Gaurav was part of the pre-opening team at Nobu Dubai, where he also assisted with pre-opening food and beverage operational support for Atlantis The Palm Dubai.  He began is career at The Taj Mahal Palace & Towers in Mumbai, India as a hotel operations management trainee.