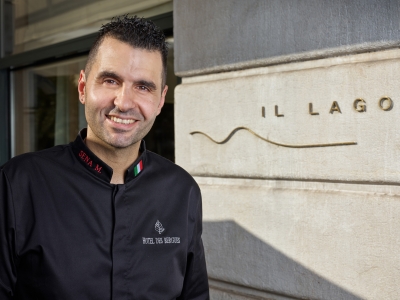 “We have developed a special relationship with our guests. They are very faithful, and we work hard to reward them for it.”

From descriptions of renowned risotto to specials that celebrate the seasons, the menu at Il Lago is always a good read, but one essential ingredient isn’t found in print: “Passion.” As Executive Chef of the Michelin-starred Northern Italian dining experience of Four Seasons Hotel des Bergues Geneva, Massimiliano Sena places heavy emphasis on his team’s drive, focus and desire to excel. “I made number of changes soon after I started here,” he recalls. “It has always been essential for me to work with passionate people. We have a beautiful team now. They have great spirit.”

There is passion waiting at the tables of Il Lago as well. The elegant and airy fine-dining room overlooking Place des Bergues attracts a lot of repeat clientele: businesspeople, many of whom return on a weekly basis, some even more frequently, and other local guests. “They can be really demanding,” says Sena of his regulars – not that he’s complaining, of course. “We have developed a special relationship with our guests. They are very faithful, and we work hard to reward them for it.”

Sena was appointed to his role in July 2016 following a careful search for just the right talent to lead the Hotel’s long-running signature restaurant. Over his first six months on the job, he worked closely at tasting ingredients and fashioning new dishes with the Hotel’s General Manager, who gave him free reign to do what he wanted with the menu.

The Chef has done just that, dreaming up at least a dozen new dishes every few months and dazzling clients with signature offerings such as langoustine scampi with seasonal vegetables and cedar mustard; green apple risotto with celery and coffee; and filet of rouget (red mullet) with calamari and potato velouté flavoured with tagliolini al basilica. Meanwhile, Sena’s working relationship with his GM continues to grow: “We have the same values and sensibilities, and he has a lot faith in me.”

Sena stays true to himself on the job. “I can be direct, but I’m humble,” he says. “I strive for transparency in my relations with people. There is nothing for me to hide.” Rather than spending all of his time in the Executive Chef’s office, he believes that communication is key to firing the passion he desires on his team. “I communicate with my four sous chefs everyday, keeping them motivated. That part of my job is essential.”

Sena figured out early that he was bound for the kitchen. The second of three brothers, one of who also works for Four Seasons, he was raised in Southern Italy by an electrician father and a mother who made her career as restaurant chef. But it was a youthful encounter with one particular culinary talent that sealed the deal.

“I was working as an attendant at a restaurant in Hong Kong run by Chef Pino Lavarra, and I was supposed to park his car. Afterwards, I went into the kitchen and saw him giving instructions to his team. The image of him standing there in his white uniform just hit me: I was totally seduced and decided then and there to become a chef.”

Following study at a cooking academy in Vico Equense, Italy, Sena apprenticed at a Michelin-starred restaurant before heading to London to work with Chef Adriano Cavagnini at La Rosetta at Grosvenor House Hotel in Mayfair. Three years later, he was off again, advancing his career at Michelin-starred spots in London, Italy and Korea.

Finally, in 2010, Sena caught up with his inspiration again not long after the American Academy of Hospitality Sciences had named Chef Lavarra one of the best chefs in the world. “He is a fantastic man, humble yet charismatic. I learned a lot from him.” Sena gained a lot as well, becoming sous chef under Lavarra at Rossellinis, a Michelin-two-star at Palazzo Avino Hotel on the Amalfi Coast of Italy. It was Sena’s last assignment before taking on his first Executive Chef assignment at Four Seasons in Geneva.

Now happy to be living and working near Lake Geneva – he refers to the hotel, whimsically, as “this fantastic boat” – Sena has a simple wish for a bright future for his young son Gabriele. “I want him to become a chef someday, just like his father!”