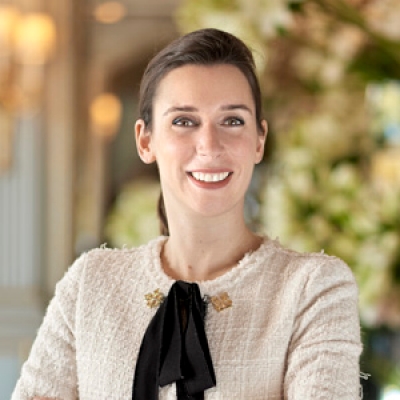 “An excellent concierge succeeds by being curious and willing to climb the Matterhorn to exceed the guest’s expectations!”

“Google is great, but it will never beat a person at this job,” says Mina Bayat, who really ought to know. As Chef Concierge of Four Seasons Hotel des Bergues Geneva, Mina leads a hardworking Concierge and Guest Services Team whose collective role is to accomplish whatever a guest desires. “As a concierge, all you want is for a guest to ask for you, to demand you: ‘I need this concierge to help me.’ That is my reward.”

Mina is known as a “problem solver.” She is wild about challenges, the more daunting the better. “When everything is crazy and the request is impossible, I love to solve it." There are no two days alike behind the concierge desk, a tidy station set opposite reception in the Hotel’s ornate, flower-bedecked lobby. “It’s a fascinating job, always engaging, because you never know what is going to happen next.”

Could be anything: from hunting down rare Swiss watches to scoring impossible dinner reservations in Geneva and across Europe, or putting together over-the-top celebrations such as a birthday party Mina’s team fashioned for the spouse of regular guest that saw an entire 80-square-metre suite filled with balloons, candles and roses, plus a violinist to serenade the arrival. “I also went shopping for new outfits for them just for the occasion.”

With its intimate size, uncommon configuration, and individually styled guest rooms, Four Seasons Hotel des Bergues Geneva is ideal for business travellers and leisure guests, including international bankers and lawyers in town to do business as well as vacationers drawn by shopping, the beauty of Lake Geneva and the Alps, or one of the city’s many renowned clinics.

That suits Mina, who believes that having the ability to serve guests on an individual basis makes her job that much more interesting with the constant opportunity to create tailor-made solutions. “Being able to work directly with our guests, I can get to know their names, their preferences, their schedules, their families and anticipate their needs.”

When she has the time, of course. Despite having an average rate almost twice that of the competition, the Hotel is reliably busy, she says, noting, “That means the only thing that makes the difference is the quality of our service.” Mina oversees a team of seven concierges, three of whom, including herself, are proud wearers of the crossed golden keys of Les Clefs d’Or, the professional organisation for the cream of hotel concierges.

Mina also oversees the bellmen and doormen of the Guest Service Team. Everyone under her is passionate and hard working and Mina admits that she can be demanding. Yet the effort that her team puts into their roles makes this a perfect combination for excellence, she says, noting proudly that her team has the lowest turnover in the Hotel.

Though her sights had been set on a career in hotels and with Four Seasons beyond, Mina fell into being a concierge by chance. After earning a Master degree from the renowned Ecole Hôtelière de Lausanne in Switzerland, she studied Spanish in Madrid and looked for jobs in food and beverage. When Four Seasons opened its Geneva address in 2005, she applied with hopes of landing a spot in catering. Instead, she was offered a job as reservations agent. “It wasn’t what I had in mind, but the management convinced me and gave me my chance to grow.”

And grow she did. Recognising her can-do spirit and comfort with communication, the Hotel’s General Manager switched her to the Concierge desk. “He told me, ‘I know you’re made for it,’” she recalls with a laugh. “He was right about that!”

Mina believes that excellence in her profession derives from experience: The more one works as a concierge and the more one discovers, the better one will be. “An excellent concierge succeeds by being curious and willing to climb the Matterhorn to exceed the guest’s expectations!”