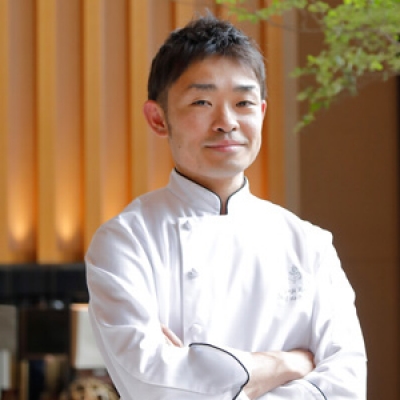 “My mantra and guiding principle is to only ever serve food that I think is pleasing to the eye and delicious to the palate.”

A tenacious visionary from his earliest days, Ryuji Koga’s life was changed by a childhood taste of duck à l’orange in a French restaurant in his hometown of Fukuoka. Amazed that such flavour and culinary richness existed, he made a plan: If he was going to be a French chef, he would go to France to learn the most authentic cuisine from Michelin-starred masters. And so he did, with his ambition acting as a laser beam guiding him to his full potential.

After studying at Japan’s finest culinary school and its sister establishment in Lyon, Chef Koga’s quest for the best led him to secure his first professional kitchen role in Joël Robuchon’s eponymous 3 Michelin star restaurant in Tokyo.  A decade in Paris’s finest Michelin-starred restaurants followed, culminating in him becoming the first Japanese Sous Chef of Le Cinq at Four Seasons Hotel George V, under 3-star Michelin Chef Christian Le Squer. As "orchestra maestro," Christian assigned the right chef for the right task: Chef Koga oversaw menu development. Such a prestigious assignment for a restaurant with a global reputation allowed his confidence to soar; to this day, the accolade remains one of the defining moments of his career to date.

Elevated by the thrilling success of his plan so far, Chef Koga returned to Japan to pursue his next challenge: a unique culinary fusion in his homeland that drew from all his previous experiences. Drawing on the meticulous techniques from French cuisine and merging them with Japanese ingredients, he has created his own style of Japanese-French fare at Brasserie restaurant at Four Seasons Hotel Kyoto, where visitors from all over the world can try his unique creations.

“The first thing always has to be the taste – it must be excellent,” says the multi-award winning chef, describing the three essential elements for a world-class restaurant. “The second is originality – you need to go to that restaurant to eat because no-one can copy it. And the last one is excellence, not just in the food but in everything, from the cutlery to the décor, the service to the overall ambience.”

Moseying round local markets in his spare time helps him to relax and he loves to experiment with western dishes at home. An avid culinary collector, he has more than 300 cookery books, more than 1000 business cards from the restaurants in which he has dined, and 12 rare artisan copper pans, which he finds yield the best finished dishes thanks to the unique heat conduction. And while he enjoys new culinary experiences, it’s the traditional things executed with precision and passion that still leave him with the most indelible memories. Stay tuned for more visionary taste explorations and culinary experimentation from a chef at the top of his game!