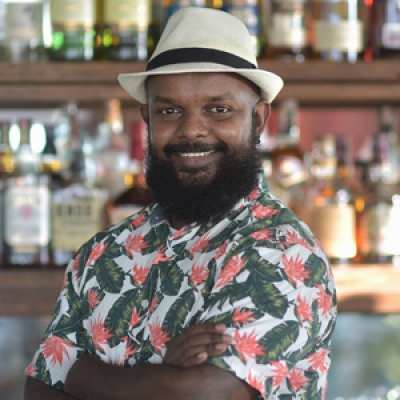 "Along with making great drinks, my role as bartender is to create a mood, an experience. From ingredients to glassware, music to service, all the elements must come together to deliver memorable moments."

As Head Bartender, Anandha Ruben brings award-winning experience and a finely-honed understanding of luxury to Four Seasons Resort Langkawi. Having spent more than 12 years in the world of hospitality, he strongly believes in the value of personalization, attention to detail and going the extra mile. “Along with making great drinks, my role as bartender is to create a mood, an experience,” he explains. “From ingredients to glassware, music to service, all the elements must come together to deliver memorable moments.”

Born and raised in Kuala Lumpur, Ruben calls himself “an authentic and typical Malaysian.” It was in the vibrant capital city that he cut his teeth, working at local restaurants during his teenage years to make some extra money. Little did he know this path would ultimately lead him to some of the region’s most celebrated restaurants. “The beginning of my journey was extremely humble,” he says. “Climbing the ladder was tough and took a lot of hard work. I’ve also had the support of amazing mentors over the years.”

At 19, hungry for new adventures, he moved to Singapore. In 2003, the country’s fine-dining landscape was restricted to a handful of legacy hotels, making it nearly impossible for a newcomer to find a foothold. “I had two things on my side though,” notes Ruben. “I spoke Mandarin. And I was willing to learn and do any kind of work.” He started out as a dishwasher in a high-end hotel, quickly graduating to restaurant server. This was where the manager of a premier steakhouse spotted his potential and offered him a job. After a year of rigorous coaching, he became a food and beverage service trainer, a role that took him to Shanghai to support the preopening of the brand’s new outlet.

In 2011, he joined the preopening team of an award-winning Italian restaurant in Marina Bay Sands. Getting the chance to assist at the bar was a gamechanger: “I recognized my calling and started developing my craft,” says Ruben, who went on to become the restaurant’s lead bartender, delivering handcrafted cocktails made with fresh produce and artisanal syrups. The next stop was ADRIFT by David Myers, where he developed a beverage program along with famed mixologist Sam Ross from Attaboy Bar in New York. He then returned to Kuala Lumpur, collaborating with Proof & Co. to helm the opening of a new bar located in a five-star hotel.

Now at Four Seasons Resort Langkawi, Ruben and his team deliver immersive drinking experiences at Rhu Bar, framed by spectacular views of ivory sands and the Andaman Sea. Along with farm-fresh ingredients “that bring Langkawi into your drink,” he elevates classic cocktails with innovative touches: “imagine tropical concoctions that are light and bubbly, and don’t fill you up instantly.”

There are also opportunities for discovery and connection. Drawing inspiration from island life, the Resort’s beverage program incorporates elements of fitness, community and sustainability. Storytelling, too, plays a prominent role. Ruben shares this gem from a fellow bartender: “A good drink is a good drink. A great drink is a good drink with a story.” Indeed, the maverick mixologist has a bagful of tales to share with patrons – from stories behind ingredients to legends of Langkawi, personal anecdotes to industry news.

In his free time, Ruben loves to explore the island’s many attractions, from stunning beaches to mangroves teeming with wildlife. He is also passionate about listening to podcasts: “it’s my favourite way to access new knowledge and keep learning about our world.”