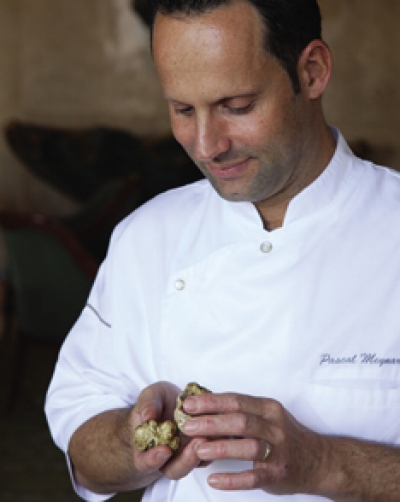 “I’m a fan of everything related to the ocean, from fish and seafood to body boarding and kayaking.”

Pascal Meynard, executive chef of Four Seasons Hotel Ritz Lisbon, is a bit of a thrill-seeker. Of dual French and Canadian citizenship, he grew up surfing and kayaking in the beautiful Basque region of France and returns there every summer to experiment with the latest water-based activities. “I’m into whitewater rafting and surf-kayaking at the moment,” he says (the latter activity being where a kayak is used to perform the same moves that one would perform on a surfboard). “It’s a huge adrenalin rush.”

Meynard loves all manner of outdoor activities. “They always lead to new challenges,” he says. And if they can be enjoyed with family and friends, so much the better. He particularly enjoys taking his daughters, Oyana and Shan, out in the kayak and going deep-sea fishing with his father-in-law: “Even if we come home empty-handed, it’s impossible to be grumpy after a day out together on the boat.”

Meynard’s adventurous spirit and love of the great outdoors has impacted hugely on his career. Forever in search of new techniques, products and innovations he can put to good use in his kitchen, his dream is “to travel the world at leisure, embracing new cultures, cooking techniques, dishes and ingredients.”

He has already made something of a head start, having acted as consultant for the opening of a specialty seafood restaurant in Hobart on the wild and rugged island of Tasmania. For his first independent venture, he drove for five days into the deep wilderness of the Canadian Rockies – a place inhabited by black bears, coyotes and cougars – eventually buying a restaurant facing the mountains in the little town of Canmore.

“It was such a remote, hidden place, but the products there were exceptional,” explains Meynard. As were the activities. “In winter there was downhill and alpine skiing, snowmobiling, snowshoeing and dog sledding, and in the summertime and fall, rock climbing, horse riding and trekking.”

When back in France, Meynard enjoys watching the traditional Basque sport of “cesta punta” (a game similar to squash, played with racquets against a wall). He also loves eating the local Basque cake. For other great food, he heads across the border to San Sebastian for “the best tapas in Spain”: “Visits to this region always inspire me. The food is so simple, colourful and tasty – exactly as great food should be.”