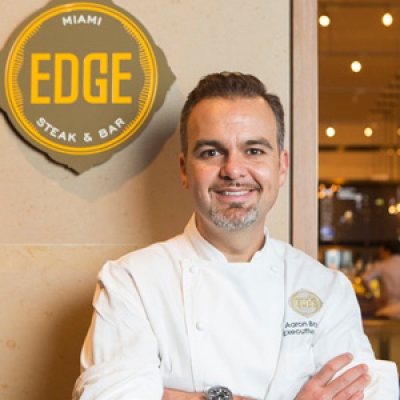 "Not all chefs have ‘a specialty.’ Some of us just like to cook good food well. I’m inspired by the product that is in front of me."

With a focus on preparing quality products right, he maintains the integrity of the modern steakhouse by focusing on a “savour-more” concept, inviting diners to enjoy great flavours in an enhanced social dining experience.  He continues to play an integral role in positioning the restaurant in the ever-changing Miami culinary scene by providing the quality cuts diners are accustomed to at EDGE, including premium selections of grain-fed, grass-fed, dry-aged and wagyu beef seasoned with homemade EDGE rub and seared to perfection on an infrared grill.  Complementing dishes include a selection of vegetable-focused sides such as the endive salad with Point Reyes blue cheese, roasted radish and a lavender honey vinaigrette, and locally sourced fare including a Florida seafood cazuela featuring grouper, pink shrimp, clams, coconut curry, green beans, and served with tostones. Known as Miami’s “Lambassador,” Chef Brooks continues to feature Aussie lamb, grilled chops served with bulgur wheat salad, tomato chutney, cucumber yoghurt and vadouvan.

A craftsman in his own right, Chef Brooks curates the finest charcuterie from heritage pork, sustainable meats and fine tune seasonings, which are then featured on the bar and dinner menus. Every week, he creates a new dining experience with the EDGE Tasting Experience menu, where guests are treated to a five-course meal with selections chosen by the chef, and at times, includes a surprise off-the-menu item.  On Sundays, EDGE features more than a buffet of breakfast favourites, with staples including a whole pork roasted to perfection in the Cuban tradition of a Caja China, made-to-order ceviche, freshly shucked oysters, seasonal Florida stone crabs, an outdoor grilling station, unlimited a la carte dishes and an endless display of desserts.

Staying true to his motto “food has to be seasonal and relevant to where you are,” Chef Brooks earned himself and the restaurant recognitions, such as one of Miami's "Hot Shot Chefs," a "Man of Meat," one of the "Hottest Places to Eat and Drink in Miami," listed on The Miami Herald's 2016 Food 50 list, and most recently "Best Chef in Miami" and "Best Restaurant in Miami," by Miami New Times.  The summer of 2016 he made his national TV debut when he was a guest on Cooking Channel's Man Fire Food, showcasing Miami flavours during a backyard BBQ.

When he’s not in the kitchen, you’ll find Brooks sourcing local ingredients from nearby farms, cycling through Brickell or over to Key Biscayne, cooking at home with his family, educating Miami’s youth on the benefits of nutrition through the nonprofit organisation Wellness in the Schools, or supporting Miami culinary artisans.