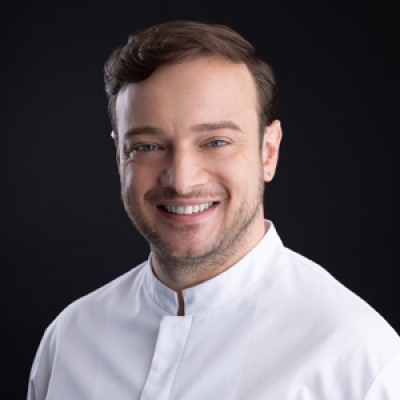 “If you want to cook well, you need to eat well.”

Driven to change and challenge the culinary landscape, Chef Aniello Turco, affectionately referred to as Nello, is young yet experienced, talented yet inquiring, passionate yet precise.  Poised for celebrity chef status, his style is progressive, forward-looking and trendsetting.

Nello always knew he wanted to create culinary masterpieces and be a chef. When he was just 13 years old, he was already learning his way around the kitchen of his parents’ restaurant, getting an early and hands-on taste for the passion that defines his life.

“It was the best possible start for me,” smiles Nello.  “To have the opportunity to see and taste everything in the moment while in that kitchen, was invaluable,” he explains.

The opportunity to teach his palate as well as hone his cooking skills is something that Nello points to as one of the critical factors to his success.

“If you want to cook well, you need to eat well,” laughs Nello, displaying a playful character that endears him to guests in the dining room.  “And whenever I find myself in a new location, I make it a priority to sample all the local produce and food on offer,” he explains, pointing to his passion for producing dishes that have more than a splash of local influence.

Inquisitive and questioning of all things culinary, at the age of 24 he set off to see what the world had to offer his increasingly discerning palate.  He spent time working with and learning from masters in Michelin-starred restaurants including Maison Alain Ducasse (Tuscany), Trussardi Alla Scala (Milan), Apsleys (London) and Noma (Copenhagen).

It was under the tutelage of Rene Redzepi, at two Michelin-starred Noma, that he took a deep dive into the world of fermentation: a course of study that opened his eyes to a whole new world of possibilities and what he believes to be the future of cuisine.

“It will be the new frontier in kitchens around the world,” he says. “It’s been around for millennia, and guided by nature, we are coming full circle back to this idea.  It is a completely natural transformation, without any added chemicals. And there is no denying the microbe health benefits. I truly believe that nature will be the protagonist of avant-garde cuisine.”

During his tenure, Nello revolutionised and repositioned Mio at Four Seasons Hotel Beijing, from a southern-focused Italian restaurant to one firmly focused on everything contemporary. Fermentation featured strongly in his menu, elevating the flavour perspective, while Nello’s energy is equally uplifting, inspiring a whole new generation of chefs and a multitude of awards along the way: Chef of the Year by Time Out Beijing (2016 – 2019), International Hotel Dining of the Year by Time Out Beijing (2016 – 2019) and Three Fork Top Italian Restaurant by Gambero Rosso (2016 – 2019) to name but a few. Mio also earned a Michelin star under his leadership.

A lifelong student, Nello continues to expand his repertoire, and while at Mio he discovered a passion for pastry and sharpening his sweet skills with training at Valrhona Chocolate Academy in Beijing and Tokyo.

As Executive Restaurant Chef of Mimo Restaurant and Bar in Nashville, Aniello Turco looks to create exciting synergies between his Southern Italian foundation and local Southern culture and ingredients. He believes the real Italy, based on core ingredients, people and soul, can be truly found outside of Italy and is found at Mimo.

A fervent music fan, he seeks to capture the energy and rhythm of Music City to deliver a can’t miss experience at Mimo Restaurant and Bar. There is no denying that he is one to watch in not only Nashville’s blossoming culinary scene, but across the culinary world.