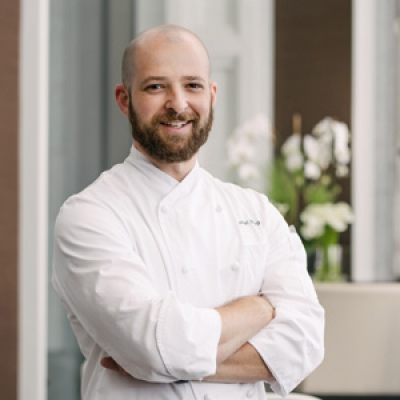 “I’ve always enjoyed cooking and love to use seasonal ingredients, based on what Mother Nature provides us throughout the year. I’m excited to be part of a world-class team at One Dalton and to create dishes that make an impact with every bite."

Growing up in Easton, Connecticut and later Massachusetts, Daniel Burger has always loved being around food and has been cooking since he was small. With a grandmother who emigrated from France, it was only natural that he would eventually find his place in the kitchen and subsequently at two of the city’s best French restaurants.

After graduating from high school, Daniel attended Eastern Connecticut State University in 2005 to study political science. While studying for his degree, he worked as a food server at a local restaurant to supplement his tuition fees.

After doing this for 2.5 years, he realised his true passion was in the hospitality industry and made the difficult decision to leave university and enrol in an advanced program at Le Cordon Bleu in Orlando, Florida. In the second half of the accelerated program, Burger moved to Jacksonville, Florida to complete multiple internships, so he could gain some necessary industry experience and better set himself up for success in the future. During this time, he worked at a catering company, a Mediterranean restaurant and Bistro Aix, an exceptionally popular and busy local restaurant.

Following his graduation in 2009, Burger moved back home to New England and accepted a position at Radius, a Michael Schlow restaurant and his fine dining flagship. Since closed, Radius was known for its very personal style of modern French cuisine and received numerous accolades throughout its 14 year tenure. Michael Schlow is a renowned Boston chef and restauranteur and was also a contestant on the very first episode of Top Chef Masters. In May 2000, Schlow won the distinguished James Beard Award of Excellence for Best Chef in the Northeast.

After working under the guidance of Schlow and gaining experience in a bustling restaurant, Burger accepted the opportunity as a kitchen supervisor at Zing! Pizza in Cambridge.

In June 2011 Burger was persuaded to join the team at the highly awarded Boston icon, L’Espalier.  The food for the restaurant was largely grown by chef/owner Frank Mclelland and provided an incredible opportunity for Burger to learn about each ingredient but also how and when it grows and how to use it. During his two years at L’Espalier he held various roles in the kitchen and set the task for himself to learn each and every position.

In 2013, Daniel decided to leave the world of independent restaurants and venture into hotels. He subsequently joined the Mandarin Oriental as banquet cook, and was promoted every year thereafter. From 2015 he ran the department as the banquet sous and in 2016 was given the title to match. Daniel continuously set goals for himself and worked extremely hard to figure out how to run the operation, culminating in his appointment as banquet chef in 2016. As department head he directly supervised one sous chef and eight cooks, while simultaneously overseeing every aspect of the banquet operation. In case life was not already busy enough, Burger also graduated from a manager training program during this time.

In 2019, opportunity came knocking in the form of a brand new hotel opening in Boston - Encore Boston Harbor. Burger joined the pre-opening team as chef de cuisine and was promoted to executive chef after only eight months. During his tenure at Encore Boston Harbor, he implemented and oversaw every aspect of the group dining operation, while also directly supervising a team of 45 members that included a chef de cuisine and two sous chefs.  Additionally, he worked closely with the hotel’s sales and marketing team to create custom menus for high profile events, of which there were many.

Now as the Executive Sous Chef at Four Seasons Hotel One Dalton Street, Boston, Burger is extremely excited to be in charge of multiple outlets where he can put his mark on the Hotel in numerous ways, throughout various departments. Overseeing a number of food and beverage operations and initiatives, Burger is responsible for launching and redesigning culinary menus for Trifecta, In Room Dining, 50/50 (residential lounge), Spa/Wellness and Catering. He is also responsible for driving change and innovation to the Hotel’s amenity program and Afternoon Tea experience in Trifecta.

“I’m so excited to be part this team, and to work with people who do a great job and want to offer a world class experience. The people here actually care and practice what they preach and are excited to come to work each day. I am thrilled to be working with this calibre of people, and love exploring my creative side,” says Burger.