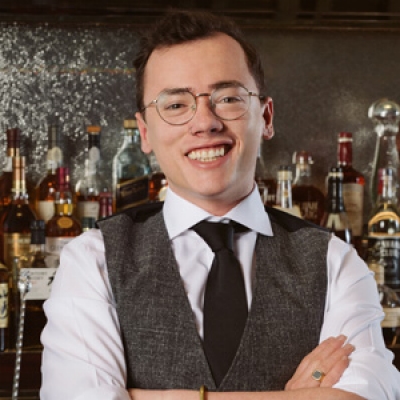 “My goal in life and behind the bar is to be approachable. Everyone will receive the same amount of enthusiasm and kindness from me. I should be able to deliver the same quality experience for each of my guests.”

“I prefer the term bartender rather than mixologist. I like tending to people and catering the experience to them, with empathy. The drinks are secondary. I want people to feel comfortable and relaxed. Our guests have stressful jobs and are travel around the world. When they sit at my bar, I want them to relax and feel comfortable talking to me,” says Troy Ali.

Troy Ali may just be the luckiest accidental bartender. Growing up in Maine, he fell into bartending by sheer chance. He had just turned 21 and was spending time at a friend’s bar in Portland, when he was asked to pitch in and pour beers when the bar became overwhelmed one night. Lucky for him he loved it and decided to transition to bartending full time and make a career out of it.

As his first gig, bartending in Portland offered Troy a great start to the profession and taught him how to deal all different types of people really well. “It’s about the people. I want them to be casual and comfortable. Portland, and LFK specifically, is where I learned to be a good approachable bartender,” says Troy.

In October 2019, Troy joined the team at Four Seasons Hotel One Dalton Street, Boston as a Bartender and hasn’t looked back. After spending time in both Trifecta and 50/50, the private lounge for residents on the 50th floor, Troy understands and respects the differences between the two locations. While 50/50 was a wonderful experience and allowed him the opportunity to engage with Four Seasons residents who have a high expectation of both service and product, he feels that he’s better suited to the energy of working in Trifecta, the Hotel’s cocktail lounge, open to the public every night.

With the official opening of Trifecta now complete, Troy is excited about what’s to come. “Trifecta has a great energy and dynamic and Trifecta guests are actively discovering things. They’re excited to try new things, and are happy to engage in interesting dialogue,” says Troy.

Regarding the cocktail menu, Troy worked through the collaborative process with Julia Casale, Director of Outlets, on designing the stunning cocktail offering. It was a two month process to match the flavours to the concept and package the cocktails correctly. “It was important to us that we create something beautiful, delicious and accessible. Let’s deliver a break-out menu in a city where this is a vacuum right now. We also wanted to create a menu that could be enjoyed by everyone. Food and drink should not be elitist. In addition to the beverage list, the culinary team has executed the perfect dish pairings for the cocktails,” says Troy.

While the expectations are high, the bartending gig at One Dalton allows Troy the creative freedom he needs to be successful, without being restricted. “I have a lot of room and resources to deliver a quality product. Every new challenge that presents itself lets you go a little bit further. The high expectations have helped me get really good, very quickly,” says Troy.

Outside of work, Troy is an avid photographer specialising in portraiture and candid shots on 35mm film. He’s a self-taught artist who enjoys finding what’s beautiful in candid moments and taking photos of people who are not used to being photographed. “It’s nice to see people in a candid light and enjoy what we see,” says Troy.

Troy is also a keen traveller, having backpacked across southern France, all of Spain and around Iceland. He enjoys taking long solo hiking trips, which “teaches you a lot about yourself.”

And while Troy’s ultimate dream is to travel the world and work at as many Four Seasons properties as possible to experience other flavours and techniques, with Italy or Mexico City being clear stand-outs, he’s currently very happy in Boston and wants to see Trifecta succeed. “Boston is not known for its food and beverage scene. It would be amazing to get Trifecta to that point and become a stand-out destination bar within Four Seasons Hotels and Resorts globally,” says Troy.