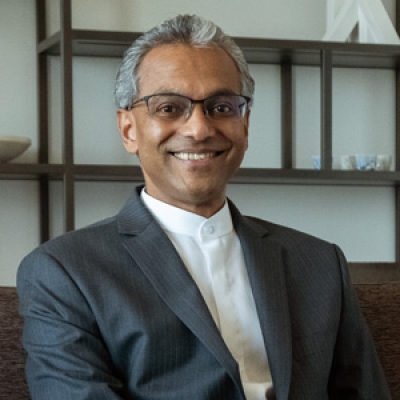 “I believe strongly in connecting with the community so we can offer a true sense of place. From my perspective, a hotel is successful only if it becomes part of the lifestyle of the city dwellers and a place where they can come together and connect.”

In a city of contrasts, Four Seasons Hotel Tokyo at Otemachi blends right in at the top. So, too, does Andrew De Brito. “I feel like a five-year-old, discovering something new from every angle, everyday,” he says, framing the property he now leads as General Manager and his own fascination with the city. “We’re in the perfect spot for guests to experience the best of Tokyo as we bring a freshness to the city.”

Freshness, indeed. The Hotel’s arrival is something of a splash in a destination that hasn’t seen a lot of new hotel openings of late. The property occupies parts of two towers, with six floors and 190 guest rooms in one and offices in the other. Both are located close to Tokyo Imperial Palace yet surrounded by one of the country’s foremost business districts. “That’s part of the contrast we provide,” De Brito explains. “Our guests can admire the lush, green tropical gardens of the Palace, and then walk down the street and be surrounded by major corporations in the centre of Otemachi.”

The Hotel offers a wealth of amenities including a state-of-the-art spa and fitness centre with an indoor pool, and world-class drinking and dining outlets – French and Italian – with outdoor seating available on a sky-high terrace. Onsite meeting and event space is extensive, the better to satisfy growing demand of foreign travellers and reinforce the competitiveness of Tokyo as a hotspot on the international scene.

All that space is also good for tapping into the local wedding market. “Weddings are one of life’s most important celebrations, and we offer an experience that makes them all the more memorable,” De Brito says, excitedly, noting that the Hotel has its own chapel and wedding showroom.

De Brito is quick to mention that the offerings aren’t intended for international travellers alone – and he wouldn’t have it any other way. “I believe strongly in connecting with the community so we can offer a true sense of place. From my perspective, a hotel is successful only if it becomes part of the lifestyle of the city dwellers and a place where they can come together and connect.”

That takes some doing, of course. De Brito recalls that while serving as a Four Seasons General Manager in Beijing, the property drew locals with “thoughtful events and experiences,” such as flower workshops and art talks in public spaces. “The lesson I learned is that programming doesn’t have to be big, but it has to appeal to people from various lifestyles and industries.” Success, he adds, is when people feel “at ease” in a Hotel space. “What I’ve always loved is how hotels make you feel comfortable and at home. The way to create that ambiance is by offering things that are enriching.”

Malaysian by birth, De Brito entered hospitality in his hometown of Kuala Lumpur. His father wasn’t exactly thrilled with his career choice, “but I stuck to it,” he says. “The things that drew me then still do: The connection with people and places. I get enthused by the spirit of collaboration and achieving goals as a group.”

He has also always loved dining and drink and has spent quite a bit of time in Food & Beverage management through his long Four Seasons career. He chose that path because of the ability it gave him to create. “It has allowed me to be very dynamic and to work with a diverse group of people creating stuff that’s amazing. I like to think borderlessly – the sky was always limit in F&B.”

An avid reader, De Brito began his run in Tokyo by poring through a history of Japan. “History is always the first thing I read when I move to a new city: It immediately connects you to a place.” He is also excited about reading one of his favourite authors, bestselling novelist Haruki Murakami, while in Japan. “His books are perfect for the train. Ever since getting to Tokyo I do travel around a lot on trains.”