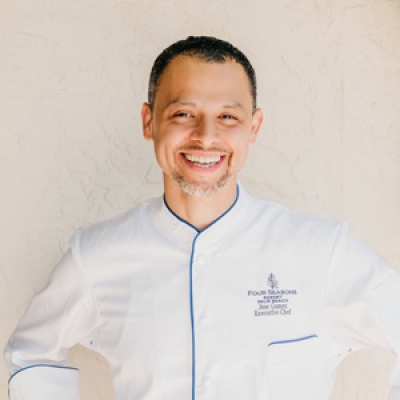 “This is Four Seasons, so we’re always going to elevate every effort. Whatever we create, it’s going to look great and taste amazing.”

“Not many hotels get to hit the reset button, so it was a great opportunity for me to be part of this one when it did.” That’s Jose Gamez on his role as Executive Chef of Four Seasons Resort Palm Beach. A two-decade company veteran at the time of his appointment, Gamez arrived in spring 2018 as the beachfront resort embarked on a renovation that included the creation of new restaurants and the arrival of a world-renowned celebrity chef. His experience was vital to the success of the transition. “I bring my own take on food and I listen to the guests. Creativity and communication are essential to the success of what we do.”

Gamez has a deep appreciation for culinary arts and operations. Born in El Salvador and raised in Boston, he was a high schooler with lofty dreams of becoming an astronaut when he took a part-time position washing dishes at a restaurant in Little Italy in the city’s North End. When a cook departed, Gamez’s boss asked if he’d liked to try his hand in the kitchen.

“He offered to train me, so I gave it a go,” he remembers. “The rush of adrenaline was immediate. With the buzz of the kitchen and responsibility for creating things that people were actually going to eat, I knew right away it was what I wanted to do.”

So Gamez did it. His boss noticed his talent and suggested a culinary school. “I did some research and saw the tuition. No way.” So he threw himself into work, building knowledge and honing his attention to detail. The restaurant was always full because it knew how to take care of people, he says. “We used to have to turn the tables to squeeze them in. It was really an important experience for me.”

Within a few years, Gamez moved onto Four Seasons Hotel Boston, working all areas of every kitchen, from the former Five Diamond restaurant Aujourd’hui to banqueting and the bustling Bristol Lounge. The Hotel’s head chef liked to change menus seasonally; Gamez learned to do the same. The trick to that is developing good connections with suppliers and their farmers, he says. “I can’t tell you how valuable communication is in this business. I have all my suppliers on speed dial.”

Gamez admits he can be a tough customer, never shy about returning ingredients that don’t meet his standards. “I tell my suppliers I’m going to do that up front. If you don’t believe in what you’re cooking, you’re just going through the motions.”

At the same time, he invites suppliers to discuss their products in the kitchen, and he takes his team to farms to see how those products are produced. It can be very inspiring for a cook to hold an egg fresh from a chicken, he says. “Farming is hard work. I want my team to be able to appreciate what they’re doing for us.”

After rising to Executive Sous Chef in Boston, Gamez transferred to Four Seasons Hotel Miami where, among other things, he helped create the Sunday spread at EDGE, Steak & Bar, rated one of the “Best Brunch Buffets in America” by Travel + Leisure.

Four years later, he was tapped as opening Executive Chef at Four Seasons Hotel at The Surf Club. As the Hotel features Le Sirenuse Miami, the first-ever location of the landmark dining experience beyond the Amalfi Coast of Italy, Gamez’s primary role was to support the Chef de Cuisine and set systems in place to get the Hotel and its culinary operations off the ground.

“For me, the opening was great. You go in not knowing where you’re going to end up. You handpick and train the team. You order the equipment. You create the opening menu. Then a year later, you look back and see how well it all worked out.”

Gamez has a similar role at Four Seasons Resort Palm Beach, including overseeing the newly renovated restaurants and banqueting operation; training and managing talent; contributing creatively to the menus, with special focus on his passion for food and wine; and, of course, assessing guest evaluations and catering to their tastes.

Taken together, the Palm Beach resort is right where he wants to be. “I’m not one of those chefs who has an ego; if my name isn’t on the menu, that’s okay,” he says. “This is Four Seasons, so we’re always going to elevate every effort. Whatever we create, it’s going to look great and taste amazing.”