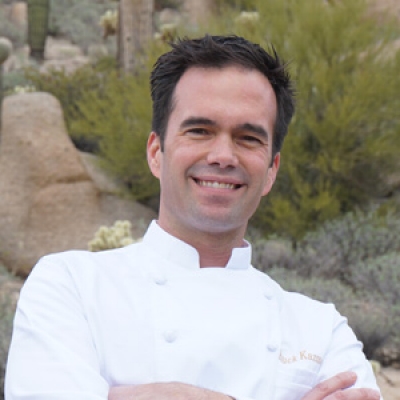 “I prefer to cook simply and naturally. If you are fortunate enough to gather the best ingredients, you should not have to dress a dish up to make it tasty. Food should be fun and fresh, not heavy and boring.”

A 25-year veteran of Four Seasons Hotels and Resorts, Executive Chef Chuck Kazmer knows his way around the kitchen. He brings decades of culinary experience to his appointment at Four Seasons Resort Scottsdale at Troon North, along with a passion for letting fresh, seasonal flavours be the star.

“My inspiration comes most often from a single ingredient – something in season – and then goes from there. What will complement the taste? Wake up the palate? How can I build texture, add colour? Then it goes to paper, with a sketch of how the completed dish should look, then on to the practical testing and tweaking the recipes. Finally, it might make it to a menu, or I might change my mind altogether and start from scratch!” says Kazmer.

Kazmer’s culinary career had humble beginnings, working at a family-owned drive-in in Texas, making shakes from scratch, cherry limeades, crinkle cut fries and the signature “Big Scottie” burger, featuring double meat and double cheese. Housemade chili, complete with a secret recipe safely guarded by then 65-year-old owner, rounded out the classic menu. To this day, when Kazmer finds himself in the area, he will stop by to chat with the owner’s wife.

Following his introduction to the industry, Kazmer soon met Elmar Prambs, Executive Chef at Four Seasons Hotel Austin, in 1991. He enrolled in a culinary apprenticeship program under Chef Prambs and began his journey with Four Seasons Hotels and Resorts.

“Food, family and friends – these will always go hand-in-hand, usually accompanied by a great bottle of wine or two,” says Kazmer. Favourite food memories include Sunday supper at his grandparent’s house in Southern Oklahoma. Kazmer’s grandfather was a butcher, and his grandmother would host the entire family for Sunday roast. Extended family, great conversation and football in the background coloured these special events.

During his time in Amman, Jordan, Kazmer credits the search for ingredients as an adventure in its own right. He recalls finding Ghada, a woman raising delectable escargot in the heart of the capital city of Amman. Then there was Nissreen, making the most amazing fresh cheeses and yogurt from the milk of goats that roamed freely through the middle of the city. Or Khalid, the farmer growing organic, ancient fruits and vegetables on lands producing culinary bounty for more than 2,000 years. Kazmer recalls picking fresh, juicy figs off the tree that grew in the park he passed on his way home each night, and plucking dried dates straight from the palm.

His most proud achievement thus far was the opening of La Capitale restaurant at Four Seasons Hotel Amman. Says Kazmer, “It is rare to have the opportunity to be involved in the complete design of a multi-million dollar restaurant at a Five-Star hotel. From the pots, pans and stoves to the cutlery and glassware on the table, I was able to custom design the dining experience.” He adds, “The end result was truly special. Crafting the menu, finding the right suppliers, creating the first and only French brasserie in Jordan – it was a truly spectacular experience.”

In Scottsdale, Kazmer is immersing himself in the food scene, and continuing his quest for seeking out the best seasonal, local flavours available. Sustainability plays a key role for him as well.

“(Sustainability) should not be a trend – it just has to be part of our culture. Food that is good for you will continue to be important; the public shift toward food that both tastes good and has health benefits is not one I see waning anytime soon,” says Kazmer. “However, we all need a night of indulgence every now and again, so I am certainly not opposed to using butter!”

Kazmer resides in the Scottsdale area with his wife, Margaret, and three children, sons Patrick and Nicholas, and daughter, Lauren. When not in the kitchen, he enjoys home brewing, visiting local farmers markets and gardening.