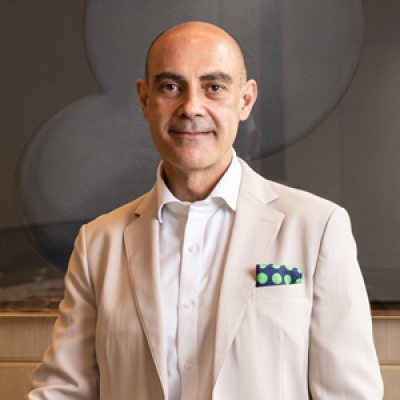 “All the values Four Seasons embraces are what I love about life and working in hospitality. It has been very easy for me to blend in here.”

“I had never seen a team like this in my life,” recalls Alejandro Bernabé of the warm welcome he received and talent he oversees as General Manager of Four Seasons Hotel Seoul. Appointed to lead the company’s first Korean address in fall 2018, Bernabé was immediately impressed with the elegant property in the heart of the city. “The design of the Hotel is fantastic; our local personnel are efficient and very passionate; and much of what we’re offering is unique here in its own way. Add Four Seasons to the mix, and you get a really great experience.”

Bernabé points as a for instance to the Hotel’s dynamic food and beverage offerings, with seven restaurants, three lounges, and one wine shop ranging from Michelin-starred Cantonese at Yu Yuan to casual cocktails and afternoon tea at Maru. “Korea is quite conservative in regards to food and beverage, so we’ve become an oasis in the city for adventurous appetites,” he explains. “We have something for business travellers, something for families, nice offerings for everyone.”

Result? “Not to sound pompous, but we are what other hotels are benchmarking against,” he continues. “And the great thing is, our team isn’t snobby about it. Everyone is trying to learn more and improve our services to set that benchmark even higher.”

Bernabé is one of only a handful of General Managers who walked directly into his position from outside the company. Four Seasons had been on his radar throughout his career, and he had been in touch with the company for opportunities for a while. “They’re still extremely selective with good reason,” he says, noting that it was his ability to adapt to the company’s culture and philosophy as much as his management skills that carried the day. “All the values Four Seasons embraces are what I love about life and working in hospitality. It has been very easy for me to blend in here.”

How did Beranbé come to those values in the first place? “I was born that way,” he says with a laugh. “All right, maybe not born. But my family and experiences made me who I am.” In a choice between pursuing a livelihood that makes bundles of money and one that makes people feel better, “I chose to make people feel better.”

Hailing from Spain, Bernabé fell into hospitality “by mistake.” He earned a degree in finance in the United States, but quickly realised it wasn’t for him. He went on to earn an MBA in human resources in France but then, confronted with a choice between returning to Spain for mandatory military service and finding career that would keep him abroad, he took a friend’s suggestion and focused on hospitality.

“My parents are doctors, and they desired me to be one, too. But I’ve always been very independent, so they supported my decision.”

In the end, the main pull of hospitality was the opportunity “to get know the world.” Mission accomplished: as his career progressed through various hotel groups, Bernabé was stationed from St. Petersburg to Jakarta, Kuwait to Malta, Geneva to Dubai, and beyond. His last stop before joining Four Seasons was a corporate job in operations. “It wasn’t my thing,” he says diplomatically. “I much prefer to be in the action, seeing guests come and go and giving them a great time.”

Now right at home in Korea, Bernabé maintains a “curious” management style. He likes to ask questions, be everywhere and be seen, and he endeavours to “say the right thing” to his team and correct them when necessary. “I think as well that I have a good ability to look at the big picture and the small picture, which is important for leadership in hospitality where you need to keep an eye on every detail.”

Away from the Hotel, Bernabé enjoys exploring Seoul despite – or perhaps because of – his “horrible sense of direction.” He loves heading out with his wife and getting lost in the city. “We do it all the time. We’ll go 20 or 30 kilometres over a weekend, easy.”