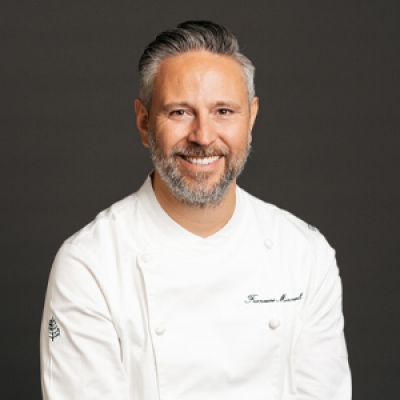 “Respect for ingredients was instilled in me as a child. It is important to know how much hard work, effort and commitment is behind every single ingredient. Farmers, growers, fishermen, suppliers and chefs; we are all part of the same chain.”

Francesco Mannelli is an award-winning chef and specialist in creating simple yet technically brilliant, delicious dishes that hero fresh, seasonal produce. Originally from Florence, Francesco has more than 25 years’ experience in some of the best restaurants in Australia and Italy, including a decade in hatted Sydney restaurants such as Balla, Est. and Bistrode CBD.

Born into a family of food lovers in one of the world’s most food-centric regions, Francesco was brought up to respect the best quality produce and the suppliers behind them – and this remains the uncompromising foundation of his cooking philosophy to this day. As a boy, he spent hours in the kitchen learning from his mother how to cook traditional Tuscan cuisine; picked grapes, harvested olives and watched the process of cold-pressed oil at his uncle’s vineyard and olive grove; and on weekends travelled 100 kilometres (62 miles) to fish off the sand of the Tuscan coast.

He pursued this passion to an apprenticeship as a chef and also attained certification as a sommelier. His first chef de partie job was in the tiny kitchen at the iconic Cantinetta Antinori in the Antinori Mansion owned by one of the oldest families in Florence, cooking traditional rustic Tuscan fare to match with local Marchesi Antinori wines. From here, Francesco landed a demi chef role at famed Villa San Michele, under the guidance of one of Italy’s great chefs, Executive Chef Attilio Di Fabrizio. It was here he refined his skills, learning tips from Attilio including how to make the perfect risotto, and cooking everything from scratch, from salumi and cheese to croissants baked at 5:00 am each morning.

Now Executive Chef at Four Seasons Hotel Sydney, Mannelli oversees all of the culinary outlets including Mode Kitchen & Bar, Grain, the poolside Cabana, in room dining, and conferences and events.

When he’s not in the kitchen, Francesco travels widely and leaves no stone unturned to source the best ingredients from Australia’s top growers and specialist local farmers - such as hand-picked tathra oysters grown in the pristine waters of Nelson Lagoon; Holy Goat organic cheese from 5th generation goats who are each named and nurtured while free roaming deep in native Victorian bushland; grass-fed English longhorn beef from grazier Richard Gunner in South Australia; and Glacier 51 toothfish caught in 2,000 kilometre (1,250 mile) deep ocean between Western Australia and Antarctica.

He loves to hear the stories behind ingredients, and meet the fishermen who brave “crazy” seas to put the best catch in his hands each day. On weekends, he relives his childhood fishing expeditions with his own kids, taking them on trips to the coast to pass on his love and respect for fresh ingredients and their natural environments – and bringing the catch home to cook up a nostalgic Tuscan feast.