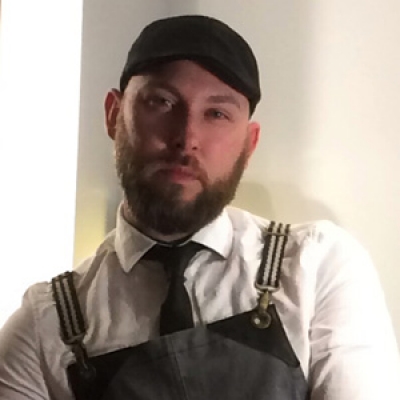 “A haircut is extremely personal. Each guest brings me a unique challenge. My goal is to create a haircut that fits their style, is right for them, grows out well, and makes them feel great.”

When Guy Bruha was in the sixth grade, he told his hair stylist he wanted to grow up to be a hairdresser. “My sister had a Crimp 'n Curl Cabbage Patch Pony,” Bruha says, “I played with it more than her.” And, the rest? Well that is history.

But the road to becoming a hair stylist was pushed to the side when he moved from Montana where he was born and raised, to the Black Hills of South Dakota for college. He then moved to Denver to pursue other career paths such as graphic design, visual merchandising, communications and retail before starting work at Venus Salon in Denver. “I remember sitting at the front desk and it clicking. It was really like an aha moment for me. I recalled that conversation from back in the sixth grade and that’s when everything became clear.”  A year later he was enrolled in The Academy of Cosmetology Arts in Denver. “I loved beauty school because it allowed me to experiment with cuts, colours and trims. I had every colour of hair you can imagine, my favourite being royal blue.”

In 2005, he graduated with his hair stylist license and became a full time stylist at the Chateau Le Rouge salon in Park Hill, Denver, before taking his talent to The Retro Room in Denver in 2009. While working there he went back to the Academy of Cosmetology Arts in 2012 to get both his barber and cosmetology licenses. “I went back to barber school because I predominantly had a mostly male clientele. I saw the barbering trend and men’s grooming really starting to have a renaissance.” Giving credit to the TV show Mad Men and Great Gatsby-era movies that were coming out, he realised that the coiffed hair style was returning and sought to be at the front end of this trend. “I wanted to be able to give my guests that full experience: from the shave to the haircut, and have them leave feeling like rock stars.” Bruha remained at the Retro Room when he joined Four Seasons Resort and Residences Vail and opened the Resort’s Barbershop in October 2015. He has been the residing barber since. For two years Bruha commuted back and forth between barbershops, and now is solely focused on being a full time barber at Four Seasons.

As the only proper barbershop in Vail, Bruha’s clients range from male to female and as young as a year old to patrons in their mid-90s. “It’s cool to literally see all walks of life come through my doors.” And while Bruha is known for his precise scissors cuts, clipper fades and razor cuts, he also does his fair share of blow outs and special occasion styles for weddings. As for his personal style, “I don’t follow trends. I point, pick, look and grab. I change my style with the seasons and my mood. And it always seems to work.”

In his free time, Bruha enjoys hiking Colorado 14ers, of which he’s done twelve out of fifty-three, as well as traveling to the state high points. If he is not enjoying the outdoors, you will find him snuggled up with his two cats, likely watching television.