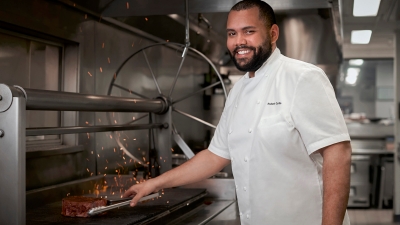 “Returning to BOURBON STEAK as Executive Chef is a great honour. I worked hard to rise through the ranks of this restaurant and I am so happy to be back, bringing my knowledge and continued passion for hospitality with me.”

Jose Gonzalez, General Manager of BOURBON STEAK says, “We were thrilled to welcome Executive Chef Robert Curtis back to BOURBON STEAK. Robert’s native knowledge of the DC area and its wealth of premium local meats, seafood and produce, paired with his experience learning from some of the best chefs in the world, make him a real asset to BOURBON STEAK.”

Born in Philadelphia but raised in Bethesda, Maryland, Curtis has a long tradition of great cooks in his family. His great grandmother would get yearly write ups in the Times Picayune for her Thanksgiving parties. This long standing familial relationship with food and family inspired him to attend culinary school. Upon graduating from Johnson & Wales University with a culinary degree in 2010, Curtis returned to the DMV. After working with great DC chefs such as Robert Weidemeir and Cathal Armstrong at properties Brabo and Restaurant Eve, respectively, Curtis found his way to Four Seasons Hotel Washington, DC, joining the BOURBON STEAK team for the first time in 2013. His work ethic and commitment to culinary excellence set Curtis apart and he quickly rose through the ranks, eventually becoming Sous-Chef before relocating to Michael Mina’s RN47 in San Francisco.

It was in San Francisco that Curtis met his now wife, Tugçe Salihoglu-Curtis, also a Chef. It ultimately was a time spent in Istanbul and coastal Turkey together that would inspire his future culinary endeavours. “I fell in love with spices, cooking on an open flame, sharing meals that were decadent in their simplicity,” says Curtis.

Following two years in San Francisco at RN74, Chef Curtis found himself wanting to see more. Ever the student, well into his career Curtis took the opportunity to apprentice under Rene Redzepi at the incomparable Noma, in Copenhagen. “I was blown away by the commitment and passion at Noma. Every single detail of the experience was hand crafted.”

Now, leading the kitchen at BOURBON STEAK DC, Curtis adds his personal touch to Chef Michael Mina’s celebrated new American steakhouse. “I have been working on creating a signature spice rub for our steaks,” Curtis says with excitement. “It tastes amazing when cooked over the fire grill.”