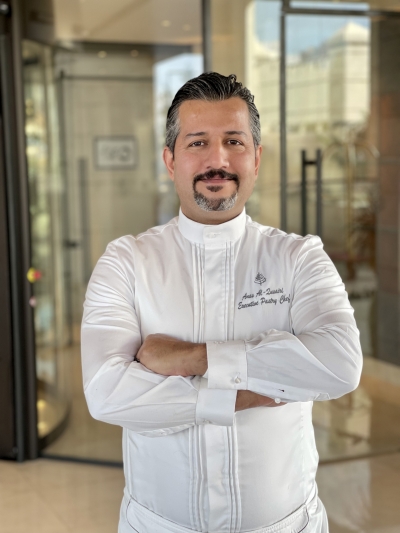 “Baking is fun, so when I bake, I love my surroundings to be bustling with energy so I prefer to work with music playing and in the company of lots of people.”

Anas was born into a family where his  father and grandfather were in the army or worked with the government. So naturally, he would follow suit. But Anas had a different plan for himself. Since 1993, he knew he wanted to be a chef and he made his dream a reality.

Anas makes a mean mohalabia, which is a traditional Middle Eastern milk pudding. It is light and refreshing – the perfect dessert to enjoy after a heavy meal, especially when paired with the tangy flavour of orange jelly, orange sorbet and a sprinkling of ghribia crumble to add a bit of crunch.

A few fun facts about Anas: His favourite condiment is Tabasco - he likes his food spicy. The three items always stocked in his pantry are: brown sugar, za'atar (thyme) and pomegranate molasses. His guilty pleasure snack is pumpkin seeds. He says, "when I start it’s very difficult to stop." His favourite tools are: espuma gun, bakery rolling pin and carving knife. And his favourite cooking show, naturally, is Cake Boss.