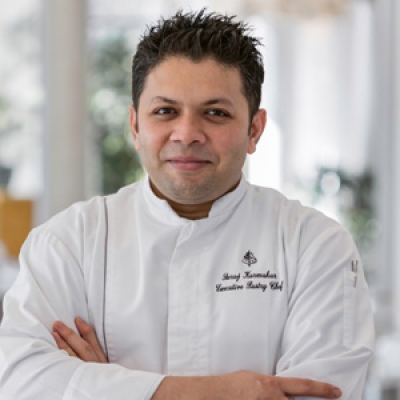 "A day without a sweet note is simply incomplete.”

Coming from a family of engineers, Suraj wanted to stand out and do something different. His first motive to choose the culinary field was seeing himself travelling the world and learning different cuisines around the globe. That was the start of the exciting journey of Suraj Karmakar.

Starting from the year of 2007, Suraj became a member of the Four Seasons family. The company opened a lot of great opportunities for him and made the biggest wish of Suraj come true: to travel the world. He gained valuable experiences with Four Seasons in such unique destinations as Maldives, Singapore, Bali, Shanghai and Vancouver, and now he continues his adventure in beautiful Azerbaijan, Baku.

“With a creative and modern approach to desserts, I am working on bringing a total pastry revolution with a focus on fresh, high-quality ingredients and simple, contemporary presentations.  My goal is to take pastries and desserts in Baku to 'awe level' of guest satisfaction," says Suraj.

While working at Four Seasons Resorts in Bali he had an incredible chance to work on a customised Four Seasons chocolate along with cocoa farmers, which was one of the most memorable experiences of his life.

“Even though we keep things light, there’s always an option to add some chocolate. I think a day seems incomplete without something sweet, and something chocolate,” he says.

While travelling Suraj was not only constantly improving his cooking craftsmanship but also developing new hobbies: he is certified open sea diver; annually takes part in the Terry Fox Run; and hiked the second highest volcano in Indonesia – Mount Gunung Rinjani in Lombo.  Suraj also loves spending time with his wife Neha and son Ahaan.