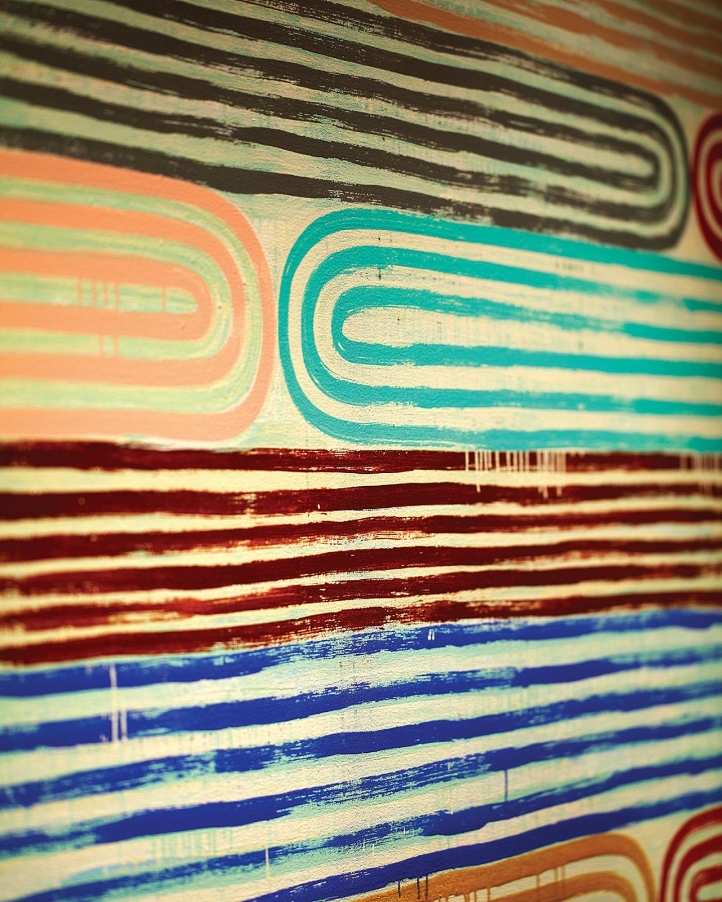 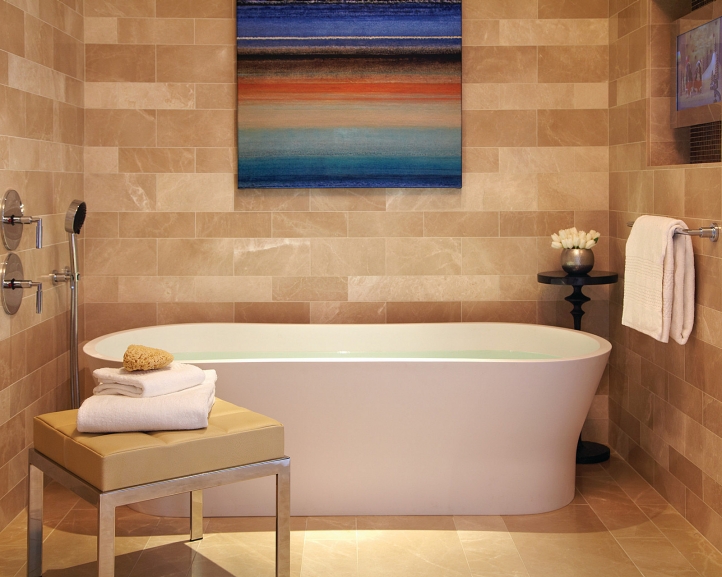 “The credit really has to go to the owners, Michael Beatty and his team at Harbor East Development, for having the vision to provide a first quality collection in a commercial setting. They were very specific with what they wanted to achieve with this collection,” according to Myers. “Michael Ricketts, vice president of development, was instrumental in guiding the choices made throughout the process.”

The Sam Gilliam shaped canvas Flipping, 1972, hangs in the main stairwell. Gilliam, who was associated with the Washington Color School is internationally recognized as one of America's foremost Color Field Painter and Lyrical Abstractionist artists. Gilliam is recognized as the first artist to introduce the idea of a painted canvas hanging without stretcher bars c.1965. He is known for stretched, draped and wrapped canvas, adding sculptural 3D elements.

The Ronald Davis piece, entitled ELR Block D is a 1970 fiberglass and resin painting of irregular, six sided geometric shape from his Dodecagon Series, hangs just off the main lobby. It is typical of his pieces of the period, in which he uses perspective to create the illusion that the canvas is a solid geometric object. Davis developed the revolutionary technique used here, and his Dodecagon work was described by painter Ronnie Landfield as “among the most visually stunning, audacious and intellectually interesting bodies of work made by an abstract painter in the last half of the twentieth century."

The large Richard Anuszkiewicz works in the lobby are the set of four dramatic optical art prints from 1977 titled Suite 16. Anuszkiewicz, one of the founders of Optical Art, a late 1960s and early 1970s art movement, was hailed by Life magazine in 1964 as "one of the new wizards of Op," and his work was later described by the New York Times: “The drama - and that feels like the right word - is in the subtle chemistry of complementary colours, which makes the geometry glow as if light were leaking out from behind it.”

Frank Stella’s vivid, abstract, sizable works are from his Waves series, which Stella sees as central to his later career. Inspired by Moby Dick, the four matched AP 1989 pieces, Quarterdeck, Moby Dick, Ahab’s Leg and The Hyena, are multi-media prints, combining such diverse media as silkscreen, lithography, linoleum block, hand-colouring, marbling, and collage on paper, with up to 20-30 processes used on each work. Stella, who is considered significant within the art movements of Minimalism and Post-Painterly Abstraction, was awarded the National Medal of Arts by President Barack Obama in 2009.

Gene Davis, an original member of the Washington Color School, was known especially for his works of vertical stripes of colour. His 1969 pieces behind the concierge desk, Jack in the Box, John Barley Corn and Battle for Grown Ups, are typical of his style of repeating particular colours to create a sense of rhythm and repetition with variations. Davis’s contribution was invaluable in establishing Washington, DC, as a centre of contemporary art, with Davis playing a significant national and international role in the Color Field movement.

Susie Lee’s 2011 Pulse is a commissioned sculpture for the Hotel just off the main lobby. Inspired by menhirs, the oldest human interventions in nature, it is a freestanding sculpture composed of compressed glass rods, LEDs, and a polished, metal base. There are two nodes of light (head and heart) embedded within the glass, which splash, with dynamic pulses, and start to fade away. As it fades away, another node splashes, and then fades. In addition to other accolades, Lee was the winner of the 2010 Stranger Visual Art Genius Award for her work in sculpture, video and performance and was selected by the Portland Art Museum as one of the recipients of the Northwest Contemporary Art Award in 2011.

Lisa Nankivil’s recent painting, In Plein Air, is on the second floor of the lobby. Nankivil has received several grants for exploratory arts projects. Nankivil is shown internationally, and her works can be found in museum collections, including in Minnesota, Arizona, and Turkey.

Karl Connolly’s 2011 commissioned stripe painting hangs on the second floor of the lobby. Informed by colour theory, his pieces are successful because they are deceptively complex in what appears to be a simple milieu. Layering his pulled stripes in painterly fashion, the visual success of the work validates the colour theory behind it. Connolly’s academic background informs his art, producing considered pieces. Connolly’s work has been shown in a number of museums including Chrysler Museum in Norfolk, Virginia and the Walters Art Gallery and The Contemporary, both in Baltimore. His work is held in private and public collections in the US and abroad.

Craig Kraft’s 2011 neon sculpture commissioned for Four Seasons can be found on the second floor. Over the past 30 years, Kraft has gained national recognition in creating original works of art that advance the techniques he has developed working with neon and the figure and, more recently, rolled aluminum. He is one of only a handful of light artists in the world who bends his own glass, enabling him to precisely manipulate the figure and light to capture his own artistic vision.

About the Washington Color School

The Washington Color School, an art movement from the 1950s and 60s, is the only major art movement to have originated in the mid-Atlantic region. The artists’ paintings reveal not just a shared passion for colour but highly individualistic visions. The artists painted largely abstract works, using scale, colour, and form as the utter expressions of making art.

Luminosity and the illusion of space are recurring elements in the Washington Color School. "It was about colour and light and form," says Beatrice Gralton, lead curator of a 2011 Corcoran Gallery of Art Color School exhibition. "It was about an all-over approach to imaging-making. It was really this reduction to the most pure, elemental aspects of art making."

The Washington Color School artists were central to the larger Color Field movement. Colour field painting is defined by expanses of colour close in tonal value and intensity, large presentations and simple compositions. Colour is the subject matter, and simple colours, geometric forms and compositions are arranged to make the viewer feel implied emotions without them being explicitly displayed, according to art historian David Anfam in Oxford Art Online.

The Color Field movement was inspired by European modernism, including such artists as Matisse, Miro and Picasso, related to Abstract Expressionism, and influenced the movements of Post-Painterly Abstraction and Lyrical Abstraction.

Atlantic Arts is owned by Mark Myers, who has been a private dealer and consultant for more than 25 years. Myers’ retail gallery, M Contemporary, is located near Four Seasons Hotel Baltimore in the Legg Mason Tower, Concourse Level, International Drive.