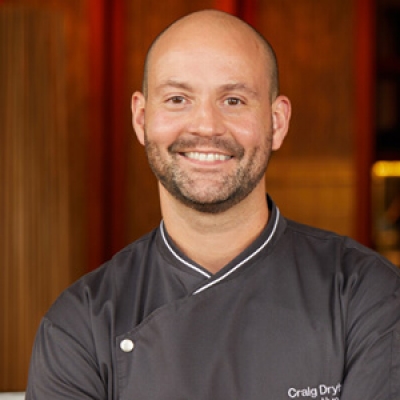 “I’m most passionate about the desire to create beautiful food from great ingredients. Knowing where your food comes from is as important as putting it on the plate.”

Craig Dryhurst is Executive Chef of the 239-room Four Seasons Hotel Denver and EDGE Restaurant & Bar, managing a staff of more than 40 members of the culinary team.

Trained in a classical fashion, Dryhurst worked in a number of five-star kitchens in London, France, the East Coast and at Four Seasons Hotel Vancouver (formerly a Four Seasons hotel), where he re-branded its restaurant, YEW, as a sustainable seafood concept alongside Chef Ned Bell. He arrived at Four Seasons Resort Maui in 2014 as Executive Sous Chef, where he made a strong positive impact in its restaurants - DUO Steak and Seafood and Ferraro’s Bar e Ristorante - and his creativity, hands-on approach, humour and never-ending enthusiasm inspired his culinary team to new levels.  A supporter of the farm-to-table movement, Dryhurst put his creative skills to work in a rollout of the Resort’s wellness menu, launched as part of the Wellness Your Way spa and nutrition program, offering coordinated menus in each restaurant.

Born in Edmonton, London, UK, Dryhurst grew up in a small town called Stevenage.  As a child, he worked alongside his father who was a keen gardener growing vegetables and assorted berries.  Visits to family in Northern Ireland also cemented his appreciation for recreating locally-flavoured dishes and globally-inspired food.

Dryhurst and his wife, Dee, have two daughters, and are happy to call the Mile High City home. They had a wonderful experience in Maui and are anxious to discover city life again.