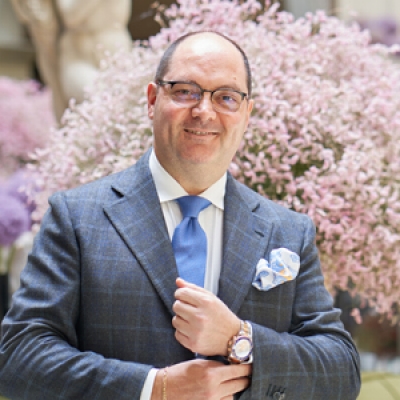 “People come here knowing we’ll show them the city in ways only we can.”

“There’s a strong sense of belonging here that I really like,” says Massimiliano (Max) Musto, reminiscing on his welcome as General Manager and the effort he sees play out daily to ensure that guests feel right at home at Four Seasons Hotel Firenze. “It’s very transparent the way the team treats the customer – and vice versa,” he continues. “The experience has a level of comfort that has kept people coming back year after year.”

While most people travel to Florence for arts and culture, there is more to experience across the city. Florence is renowned for its beautiful landscaped gardens and the incredible local food and beverage scene. Four Seasons celebrates both, says Musto, noting that the Hotel’s culinary experiences include the very best of Florentine cuisine at Michelin-starred Il Palagio; the Atrium Lounge Bar; the new Asian Gastro-Bar, Magnolia; the Summer Trattoria Al Fresco and Pool Tree Bar, perfect for lounging in the shade. Add in the largest, lushest private garden in the city arrayed with statues, fountains, and centuries-old trees, and the Hotel is a destination on its own.

Then there are the Hotel’s unique “Florence Rhapsody” packages – from touring the Arno River aboard a 150-year old Renaioli, to a hot-air balloon transfer to the beauty of Tuscany and a ride back in a luxury SUV – each pieced together with input from management. All of the above and more make the property “so much more attractive,” says Musto. “People come here knowing we’ll show them the city in ways only we can.”

Meanwhile, Musto brings an abundance of international experience garnered over two-decades-plus with Four Seasons. It’s something he believes is important to share with the team and their guests. After all, he says, “We’re in the people business at a very international hotel. My background can elevate the Hotel, just as it has elevated me.”

Born and raised in Napoli along the southeast coast of Italy, Musto has approached every role in his career with a personal passion for excellence that he learned from his father, who passed away when Musto was 10. “He impressed upon me the importance of giving everything my best shot. He’d say, ‘it doesn’t matter if you end up picking up discarded cigarette packs off the street – be the best at it’.”

Musto was initially drawn to the hotel industry by travel TV. “I was always fascinated by travel shows, and I knew one day I’d go abroad,” he recalls, noting that he left Italy bound for hotel school in London and his first assignment in Glasgow unable to speak a word of English. “I told my mother – in Italian, of course – that I’d be back in a year.”

So much for that. Florence is Musto’s 13th posting with Four Seasons. Along the way he has lived in 10 countries and managed city hotels, beachfront resorts, even a tented camp in Thailand. Whatever the setting, he has always grown: “Every time you experience a new culture, your life is enriched.”

Musto was on a getaway in Langkawi, Malaysia with his family and mother when the call came from Four Seasons offering the opportunity to lead the Florence address. He took a bit of time to think about it, but knew immediately that he couldn’t say no. “How could I? I’d been with the company for 21 years and away from Italy even longer.”