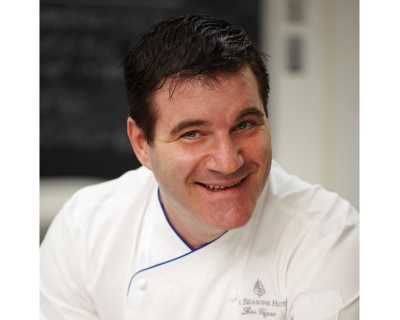 “I believe in a symbiotic relationship in food. Flavours should work together, but maintain their individual flavours.”

Four Seasons Hotel Las Vegas continues to set the bar for culinary excellence as veteran Executive Chef Michael Goodman leads his team with flair and a passion for cooking.

“Las Vegas has become a premiere dining destination, and the wealth of experience and culinary talent in our kitchens ensure that Four Seasons dining options are some of the most sought after in the city,” says Chef Goodman.

It is this breadth and diversity of experience in some of the world’s culinary hotbeds that inspires much of Goodman’s varied regional and international cuisine throughout Four Seasons Hotel Las Vegas, where he oversees a wide array of food and beverage operations including Veranda Restaurant, more than 28,000 square feet of banquet space, a kosher kitchen and Four Seasons Catering To You, the offsite catering program.

Goodman, who has a passion for creating simple dishes with robust flavour, is best known for his sophisticated signature creations that reflect light, modern influences.

“I believe in a symbiotic relationship in food,” he says, “Flavours should work together, but maintain their individual flavours.”

A graduate of the Culinary Institute of America, Goodman was selected in 1992 as one of 12 American-born chefs under the age of 34 to be a semifinalist in the US flight of the prestigious Bocuse D’Or cooking competition. Prior to joining Four Seasons, Goodman’s experience included several New York properties including the Helmsley Palace, the American Stanhope and the Hudson Golf Club.