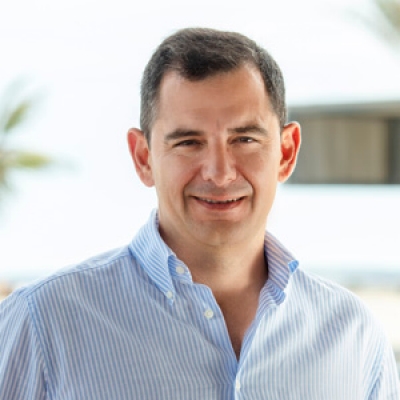 “This property combines its own sense of luxury and adventure, so it’s important for me to ensure that we’re delivering Four Seasons service with our own DNA.”

“Everybody else takes a right; our guests go left,” says Borja Manchado, detailing the route from the international airport to the luxury hospitality experience he oversees as General Manager of Four Seasons Resort Los Cabos at Costa Palmas. “They’re headed in a different direction from other properties here along the Baja Peninsula. It gives us a greater sense of adventure, uniqueness and romanticism right from the start.”

Manchado goes on, tracing the drive through desert and mountain scenery, past the Robert Trent Jones II-designed golf course, to the Resort entrance where breezes from the Sea of Cortéz roll over an immaculate 3.2-kilometer stretch of beach to kiss guests before they step inside. “The water is so calm and safe and beautiful with all kinds of marine species,” he says, a little breathlessly. “We can see manta rays jumping from our deck.”

From the cool, pared-down essence of its architecture combining layers of textures, metal, wood and stone; to its 18-acre organic farm growing truly local produce for four Resort restaurants; to its private marina opening onto experiences from swimming and snorkelling in the wild blue to overnight glamping on a deserted shore, the Los Cabos property, says Manchado, “is just made for Four Seasons clientele.”

So is Manchado. As with all of the company’s GMs, he sees Four Seasons renowned service as the standard for catering to guests. But he’s bringing it to “another step of sophistication” to match the Resort’s architecture and design. “This property combines its own sense of luxury and adventure, so it’s important for me to ensure that we’re delivering Four Seasons service with our own DNA.”

Key to that is getting the Resort team on board, of course. Manchado sees his management style as focused on maintaining a balance between the employee experience, the guest experience, and owner expectations. Any decision he makes affects all three, he says. “My job is to elevate everything without compromising the employee experience. Teams in the past have always told me that I make them feel ‘very real.’ I like it when they tell me that.”

Manchado got his start in the military in his native Spain. He didn’t really know what he wanted to do for a career, but he knew he wanted to travel. “I tried to find something that would help me do that.”

He briefly contemplated diplomatic service, but instead decided to focus on tourism, taking cues from friends who had worked in hotels. After some research, he chose the international hotel school in Glion, Switzerland. “That opened up a whole new world for me,” he remembers. “There were 25 different nationalities in my class, people from all over the world. I’d never been exposed to anything like that. I really liked it.”

It liked him back. Of countless takeaways from a 20-plus-year hotel career served on every continent except Antarctica, the most rewarding for Manchado has been meeting people from different cultures and backgrounds. “There are good times and bad times in hotel work, but the teams tend to move in one direction. I was in a country with revolutions going outside and society divided, but you didn’t feel that in the hotel. It allowed people to come together.”

With his Four Seasons experiences evenly divided between city hotels and resorts, Machado could have experienced his first role as GM just about anywhere, but he’s pleased he ended up where he did. “We have small children right now, so resort life is nice for this stage of my family. We’re outdoor people, so Los Cabos is perfect.”

Well, almost. “I like to surf, but I also like to ski. If there was a snow-covered mountain here, I’d have everything I need.”