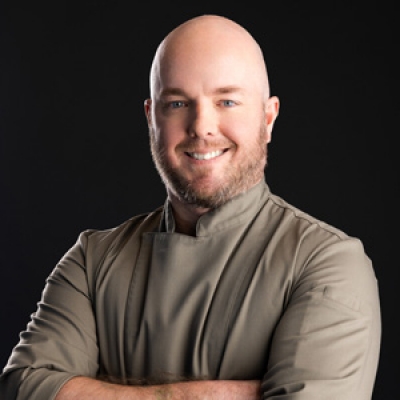 “From foreign delegations to company conventions to a beautiful bride, I want to create an elevated event experience that is completely unique and pairs technique with superior service and really great food.”

Patrick Hodge did not set out for a career in culinary – in fact, it found him after an unfortunate event that changed the trajectory of his life.

Patrick was studying English and Journalism in Columbia, South Carolina and working part-time at a local restaurant as a delivery driver when his car was stolen. He needed the job to pay his bills but obviously was operating at a loss without a vehicle.

Luckily, the restaurant offered to let him work the grill in the kitchen. It was the first time Patrick realized he had a knack for working in the kitchen. Shortly thereafter, he moved to Georgia and worked catering jobs to put himself through culinary school.

After graduation and in need of a change in scenery, he moved to Washington, DC where he spent 10 years in various culinary capacities, perfecting his ability to serve the masses and catering to national politicos in lavish event spaces. In 2017, Patrick officially joined Four Seasons Hotel Washington, DC as a Sous Chef at the onsite restaurant Bourbon Steak, then as Senior Sous Chef at its in-house restaurant.

When the opportunity arose to join the opening team of Four Seasons Hotel Nashville, Patrick seized it.

Having visited Music City before, he was drawn to entrepreneurial energy of opening a hotel and creating a catering experience that is all new to Nashville.

His menu draws on various influences from Asian to Italian to local southern infusions. Prioritizing technique, Patrick and his team provide an elevated experience that treats each guest as the best of the best through the art of proper service and great food.