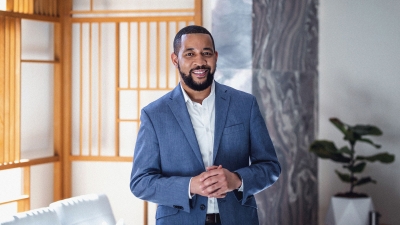 Director of Spa and Wellness

"Once a dream, and now my story. Loving what you do makes any job seem like a fairytale."

Originally from Washington, DC, Eric Smith followed his heart and his love of fashion to New York City, where he graduated from the Fashion Institute of Technology with a Bachelor of Arts Degree in 2004. After a short stint in fashion, Eric fell into the hotel industry straight out of college, beginning his hotel career with Mandarin Oriental in Washington, DC as an attendant shortly after graduation.

In just six short months, Eric was promoted from attendant to front desk concierge and then transferred to the Mandarin Oriental in New York in 2006. After a short time he was promoted again to concierge supervisor and moved back to Washingto,n DC and then moved up again to operations supervisor and then operations manager. Not long after he was appointed as a trainer for Mandarin Oriental and travelled extensively throughout America and Asia Pacific. In his role as trainer, he was responsible for training all of the operations teams throughout the United States and assisted with opening more than seven properties globally in addition to offering operational support to hotels as and when needed.

At the end of 2012, Eric received an offer to move to Shanghai, China to open the Mandarin Oriental Shanghai as spa operations manager and subsequently became the director of spa in 2015. While in China he also spent some time living in Taipei, Taiwan and opening the Mandarin Oriental Taipei.

After four years in China, it was time to move home, and Eric had the opportunity to move back to the United States and work for a new and emerging brand.  In 2016 he was appointed director of spa at The Spa by Ivanka Trump at the Trump International Hotel in Washington DC.

In 2017 it was time to move for another challenge, but this time in Philadelphia at The Rittenhouse Spa & Club where he oversaw the salon, spa and fitness club.

By 2019 the pull to move back to New York City was strong, and Eric had a wonderful opportunity to start consulting for The Dangene Skincare Institute, an advanced skincare institute within the CORE Club, an exclusive membership-only club. Six months of consulting enabled Eric to gain exposure to and experience with the advanced medical skincare side of the business.

In early 2020 Eric joined the Equinox Hotel as director of spa and oversaw a space including six treatments rooms, a cryotherapy chamber, hair salon and infrared technology facility.

After almost two years with Equinox, Eric was looking for his next opportunity and jumped at the chance to join Four Seasons Hotel New York Downtown as the Director of Spa and Wellness.

With almost two decades of experience in luxury spa services and operations, Eric Smith offers a unique hybrid of vision, passion, and leadership. From his humble beginning of folding towels and booking appointments, Eric has been lucky enough to experience and learn every aspect of the business. This has subsequently blossomed into a love for connecting with others and providing guests with a platform for positive transformation. With world-class mentorship over the years, Eric has evolved into a skilled leader, managing and empowering teams to provide the most premium service to clientele.