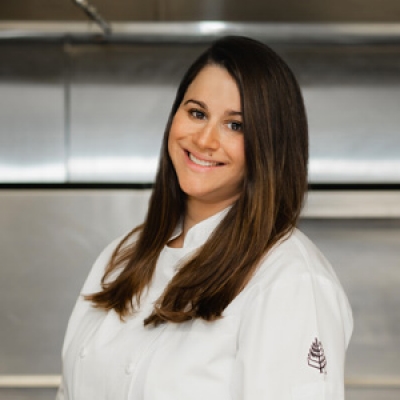 “When you finally have the opportunity for a dream to come true, it's easy to stay motivated and get excited about what you do each day."

As the daughter of chef instructor Michelle Tampakis, Maria Tampakis grew up surrounded by some of the most talented and award-winning chefs. Growing up Maria travelled to culinary events around the world and naturally headed in the direction of a culinary career, starting the process at a local pizzeria. Every summer, Tampakis worked in hospitality internships to further her knowledge of the industry and during the colder months, moved to Las Vegas to work for Paul Edwards at Chef Rubber. Since then, she has worked in some of the world’s top restaurants.

Following her graduation from the University of Delaware’s Hotel and Restaurant Management Program with a Bachelor’s Degree in 2008, Maria went on to complete the Culinary Arts program at the Institute of Culinary Education in New York City, where she started a career training program. It was here that Maria was able to cook all day long and learn from some of the most skilled chefs in the city.

After graduating from the Institute of Culinary Education, Maria accepted a cooking position with celebrated and globally renowned Chef Jean-Georges Vongerichten in Midtown Manhattan. Based at Jean-Georges for two years, Maria gained the skills needed to work in a bustling city kitchen with a demanding schedule and high-expectation guests.

In 2011, Maria moved to London to take on the role of Chef de Partie at Dinner by Heston Blumenthal, located within the Mandarin Oriental Hyde Park, London. Blumenthal is not only the pioneer of sensory cooking, but is also an Officer of the Most Excellent Order of the British Empire (OBE). It was here that she oversaw multiple stations, truly immersing herself into upscale British cuisine.

After nearly one year with Heston Blumenthal, Maria jumped at the opportunity to work with one of the United Kingdom’s leading celebrity chefs, Gordon Ramsay. Working across two Gordon Ramsay restaurants in different locations – Heddon Street Kitchen and Bread Street Kitchen – Maria proved herself time and time again, and learned that organisation, motivation and discipline are keys to success.

After nearly six years in London, it was time to return home to New York City and be closer to family. Maria initially began working for the Institute of Culinary Education as the director of purchasing and was then promoted to director of operations in 2016. At ICE Maria also taught recreational students, assisted with the career culinary and pastry programs and worked with the special events team.

In 2018, Maria left the Institute of Culinary Education due to the birth of her daughter, Emilija. In 2020 she accepted a highly coveted role of global culinary director for the Estiatorio Milos restaurant group, overseeing culinary operations domestically and internationally.

Maria's storied journey continues with her assuming the Executive Chef position at Four Seasons Hotel New York Downtown, and bringing a wealth of global experience in both cooking technique and cuisine styles.

“When you finally have the opportunity for a dream to come true, it's easy to stay motivated and get excited about what you do each day. That's how I feel about returning home to New York City and working with the best in the business at Four Seasons Hotel New York Downtown," she says.