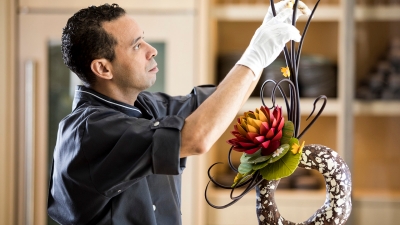 “The world of sweets is for everybody. No matter your taste, you can always find something on the dessert menu that will make you happy.”

Rabii Saber, Executive Pastry Chef at Four Seasons Resort Orlando at Walt Disney World Resort, brought a touch of the Hawaiian Islands with him to Orlando, by way of Four Seasons Resort Lanai.  In Lanai, Saber loved the abundant fresh fruits available. The same goes for Orlando, offering some of the mainland’s finest produce, serving as inspiration for his endless dessert options.  Saber oversees the dessert options for the resort’s six restaurants, in-room dining, and banquet operations.

In Lanai, Saber oversaw dessert menus for nine outlets between two properties, while supplying bread and pastries to small community markets across the island. “There was a huge selection of exotic ingredients to work with in Lanai, but I had to be very creative to put it to good use.”

While many of Saber’s desserts incorporate fruit, he is also a master chocolatier. Chocolate sculpture is a talent of his, and his edible art is often featured at special events at the resort, such as galas and weddings. In December 2018, Saber was selected as one of the featured craftsman at the Four Seasons Pop Down event in Miami, where guests were dazzled by incredible cuisine served aboard a superyacht. Saber’s creation was hand-sculpted chocolate driftwood, seashells, coral, sea urchins, starfish and more, all placed in an illuminated underwater display with the incredible desserts floating above. The dessert was a verrine of white chocolate, pineapple confit and mango passionfruit cream. In addition to the Pop Down, Saber was also an invited participant at the renowned Pebble Beach Food & Wine Festival in 2017, and has participated in the Epcot® International Food & Wine Festival annually since 2015.  In 2016, Saber was a guest chef at the James Beard House in New York, an invite-only opportunity extended by the James Beard House to chefs based on numerous criteria, including national reputation and demonstrated culinary excellence.

Saber was born and raised in Morocco, and recalls helping his mother late into the night creating sweets from honey and almonds for morning holiday festivities. Though it was “a little bit nuts for men to be in the kitchen in Morocco those days,” Saber kept at it, fashioning cakes for siblings and friends before studying the culinary arts and heading off Five-Star restaurants across Europe and the US.

His path took a pivotal turn in the mid-‘00s when Top Chef Michael Voltaggio offered him a slot as head pastry chef slot at a start-up in Los Angeles. His boss at the time, Frederic Monti, a renowned Master Patissier in his own right, advised Saber to turn it down. “He told me if I wanted to be a good pastry chef, I should stay in hotels,” he recalls. “He was right. With dining rooms, banquets and room service, there are so many possibilities. At restaurants, all you do is plated desserts.”

Saber keeps a close eye on new techniques, noting that pastry is a “whole other world” within the culinary arts that demands the exactitude of chemistry rather dashes here and best judgments there. In 2016, after an extensive interview and vetting process, Saber was selected to be on the US team for the 2017 Coupe de Monde de la Patisserie in Lyon, France—known in the pastry world as the "Pastry Olympics."  Only happening every two years, this is considered the pre-eminent pastry competition in the world. The selection process to qualify for this prestigious competition involved more than fifty national rounds and four continental selection events in Africa, Asia, Latin America and Europe. In total, 22 teams competed, and the American team placed fourth. Saber was in charge of chocolate artistry, and his chocolate cake creation won an award as the best in the competition. In addition, in 2019, Saber was proud to be recognised as a semi-finalist in the prestigious James Beard Awards in the category of Outstanding Pastry Chef.

Like Hawaii, Saber has found Orlando to be a little slice of paradise. “The skies, the trees, the sunsets here are so beautiful.” Passionate about fishing, Saber likes to go Florida bass fishing whenever he can find the time.