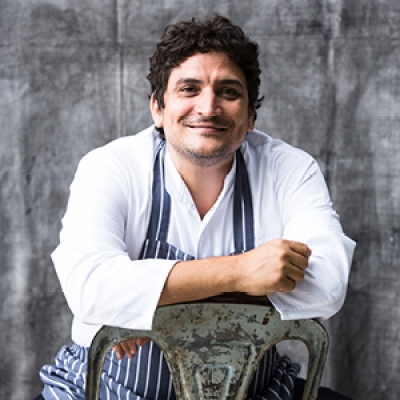 “Palm Beach is an ideal place for me with all of its similarities to my home in the South of France including the environment, the sun and the sea.”

Italo-Argentinian Mauro Colagreco is Chef Patron of restaurant Mirazur, located in Menton on the Cote D'Azur, declared #1 at The World's 50 Best Restaurant Awards 2019, marking the first time France has received the number one position. In November 2018, Colagreco opened his first restaurant in the United States at Four Seasons Resort Palm Beach with the opening of Florie’s.

“I seek out diverse parts of the world to share my cooking philosophy with new communities,” says Colagreco. “Palm Beach is an ideal place for me with all of its similarities to my home in the south of France including the environment, the sun and the sea. I am excited for the opportunity to work with Four Seasons, a brand that carries values I hold dear such as excellence in hospitality and ambition.”

His training began at the Gato Dumas hotel school in Buenos Aires, where he worked in some of the city's most prestigious restaurants including Catalinas, Rey Castro, Mariani and Azul Profundo. In 2001, as a newly qualified chef, Colagreco headed to France and took an internship with Bernard Loiseau, where he remained as demi-chef de partie until Loiseau's death in 2003. He then worked in Paris and held the positions of sous-chef de cuisine to Alain Passard at l'Arpege, demi-chef de partie at Alain Ducasse at the Hotel Plaza Athenee, finally spending a year at Le Grand Vefour.

Colagreco established Mirazur in 2006, and in less than a year, he earned his first Michelin star followed by his second in 2012 and was awarded a prestigious third star in February 2019. In 2009, Mirazur became officially one of the best restaurants in the world listed in The World's 50 Best Restaurant list. The list has become the most anticipated indicator of the best places to eat globally. In the same year, Colagreco was also awarded "Chef of the Year" by the prestigious Gault & Millau restaurant guide and in 2010, gained 4 toques Gault & Millau Guide to France.

Nadim Ashi, founder of Fort Partners and owner of Four Seasons Resort Palm Beach, tapped Colagreco to bring his vision for memorable dining at the Resort to life, rivalling some of the best culinary destinations in the world. Florie’s menus are inspired by Colagreco’s Mediterranean spirit, multicultural background and international vision, and are centred on live fire cooking. His instinctive cuisine is rooted in using the freshest, hand-picked ingredients transformed as little as possible and prepared in natural presentations.

“I consider myself to be a chef without borders - always pushing myself to experience new ingredients, new flavours and regions of the world - which is why I wanted to come to Palm Beach. The Island's coastal environment and exceptional Florida produce are perfect for my cooking. My vision for Florie's is to be a destination where locals want to eat every night of the week and guests leave with lasting food memories."