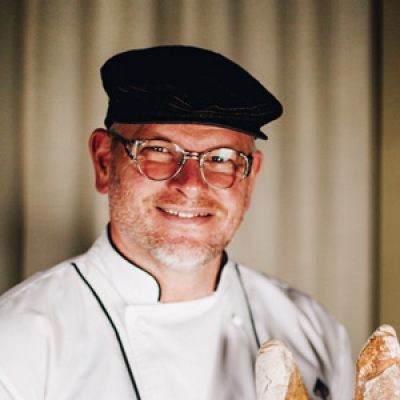 “It is never a bad thing to make a living, but it’s better to make a living on something that’s good.” That’s Sven Mostegl relating his perspective on business and his lifelong passion for the profession that has landed him a consulting role for Four Season Hotel Riyadh. “I’m always excited to be in the kitchen, but I built my bakery to do more than just feed people,” he continues. “I also want to help them. It’s important for people to understand what they’re eating and to think about eating better.”

Mostegl’s path to Four Seasons traces from the capital of United Arab Emirates where he operates Baker’s Kitchen, a bakery and restaurant, in the affluent Dubai Marina community. One day in 2018, he received a visit from Guenter Gebhard, now Senior General Manager of Four Seasons Hotel Riyadh, who at the time was managing a different property for an international hotel group.

“Guenter had been reading my thoughts about baking on social media and was intrigued,” he remembers. The two had a lot to talk about, including their shared interest in food and health, and specifically Mostegl’s strongly held view that bread can and should be healthy.

There are various angles to Mostegl’s perspective, but at heart it is that some grains have elements that are at odds with the human digestive system. “I like to say, ‘the guts,’” he corrects. “That’s where your soul is.”

Things are done differently at Baker’s Kitchen. Working with the finest whole-wheat organic flour and grains and using classic, traditional recipes, Mostegl employs a long fermentation process to reduce or eliminate the natural and agricultural toxins of grain while avoiding things like chemical additives, preservatives, and artificial colouring that are typically found in processed bread.

Result? A range of healthful, fully fermented and flavorful breads from German rye to French baguettes, Arabic flat bread to Italian focaccia, sourdough stollen to his specialty Keto Bread. Since assuming his role with Four Seasons in 2018, Mostegl travels to Riyadh four times a year to consult with the Hotel’s Food and Beverage department and to work with and train various members of the culinary team on his techniques. “I even bring my own sourdough starters!” His healthy baked goods are now featured at every food-and-beverage outlet, as well as on the in-room dining and catering menus.

Mostegl also communicates monthly with Gebhard, whom he holds in high regard. “He is demanding in the right way and very professional,” he says. “Guenter is interested in food lifestyles and wants his team to bake for good health and for his guests to enjoy it.”

Born and raised in the Black Forest region of Germany, Mostegl followed his father into baking, turned professional at age 15, and was certified as a Master Baker at age 18 – no small feat in a country that has 3,500 registered types of bread.

After taking detours into project management and engineering, Mostegl fell back on baking and relocated with his wife to Dubai to open Baker’s Kitchen in 2003. “It was the best decision of my life.” At the same time, his focus changed along with his health. “I had Type 2 diabetes, a big fat liver, and super-high blood pressure. When I consulted with doctors, they just prescribed pills.” So he began studying nutrition and transformed not just his lifestyle and diet, but also the way he bakes and consumes bread. And now? “No more diabetes, my blood pressure is good, and my fatty liver is 90% gone.”

So, what does the baking community think of Mostegl’s views? “I paint a very provocative picture,” he admits with a laugh. “Too many people don´t fully understand how they are affected by what they eat.” But he sees bright spots and, hopefully, better health on the horizon. “When I give programs here in the Middle East, sometimes I’ll have 10 or 12 German bakers who want to change their style toward health. Governments seem to be coming around, too.”