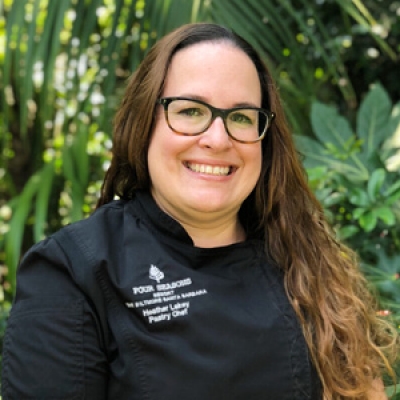 "There’s something very special about sharing – be it flavours and celebrations with guests, knowledge with students or techniques with my team. There’s a personal side to it that brings us closer together and helps to create truly memorable experiences."

With an educational background in communications and an early career choice in teaching, Heather Lakey would seem an odd fit for a pastry chef. But her passion for the culinary arts shone through and prompted a career change in 2008, which would reshape her direction and put her on a star path in the world of pastry. In fact, her experience as an instructor brought out her strengths in communication and leadership, which she uses in guiding the pastry team at Four Seasons Resort The Biltmore Santa Barbara.

Born and raised in Visalia, set within California’s Central Valley, Heather’s educational accomplishments are impressive - Bachelor’s degree in communication from Arizona State University and a Master’s in Business Administration in Global Management from University of Phoenix. She pursued teaching, with faculty roles at both Chandler Gilbert Community College and University of Phoenix, instructing courses such as communication; critical and creative thinking; and teamwork, collaboration and conflict resolution.

In 2008, Lakey took a career move for the sweeter, as she went on to earn another degree - this one an Associate’s Degree in Culinar, from the Arizona Culinary Institute. This led her to the pastry kitchen at Four Seasons Resort Scottsdale at Troon North, where she spent seven years exploring and perfecting her craft. From testing recipes to creating birthday cakes and sugar art and chocolate showpieces for events, Heather continued to be recognised as a natural – even winning the National Association for Catering and Events “Element Interpretation” competition.

Lakey moved (further) west in 2015 to Four Seasons Hotel Westlake Village, where she was promoted to Pastry Sous Chef and found her way up the California Coast to Four Seasons Resort The Biltmore Santa Barbara. Here, she leads her team in creating the most beautiful, flavourful and creative sweet treats and more, and guests have certainly taken notice. “I love when guests seek me out to tell me how much they enjoyed something my team created – it’s the ultimate compliment, really, and one that I take great pride in hearing.”