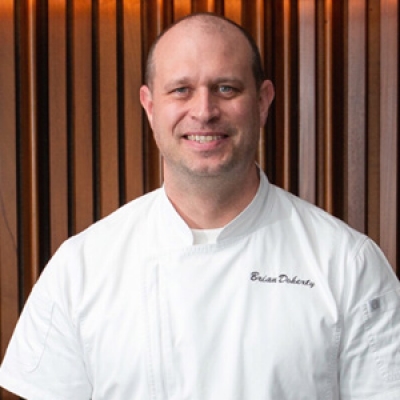 “I have been blessed to work with amazingly talented professionals and hope to teach and develop young culinarians.”

While many opportunities have come to Brian Doherty, he is excited to be back with Four Seasons Hotels and Resorts, a journey he started in 1997 in Seattle when he joined the brand’s original location in the Emerald City.

“I grew up here, my family is near here in Bremerton, Washington and after travelling around, I always miss it and find my way back,” says Doherty. He returned to Four Seasons as Executive Chef, driving, leading and developing the culinary team at the downtown Hotel located next to Pike Place Market. “I have always had a great deal of respect for this company, its standards, focus on quality, and service.”

Prior to rejoining Four Seasons, Doherty was the executive chef for Kirkland, Washington’s The Woodmark Hotel. Other Seattle stints included senior leadership positions at The Mark and SLS Seattle.

At Four Seasons Olympic, Doherty was restaurant chef and transferred to Four Seasons Hualalai in the Big Island. His love for Seattle drew him back to Seattle, this time under the Fairmont flag. Traveling south along the coast, Doherty spend a few years at Fairmont Newport Beach where he collaborated with local farmers on a goat cheese and honey program.

“I have been blessed to work with amazingly talented professionals,” adds Doherty. “I have a deep passion for food and cooking, and hope to teach and develop young culinarians.”

Doherty continues to build a strong food and beverage program at the Hotel, focusing on innovation, being more involved in the community, and using the very best seasonal ingredients of the Pacific Northwest.

“Fall and winter are also exciting with apples, beets, cabbage and wild game, plus root vegetables, squash and citrus flavours,” continues Doherty. Along with a culinary team at Goldfinch Tavern, Doherty oversees food and beverage direction for in-room dining, poolside at the outdoor infinity pool and bar, as well as events at the 10,570 square feet (982 square metres) of space on the second floor of the Hotel.

With panoramic views of Elliott Bay and the Olympic Mountains from the restaurant and event space, Doherty has some of the best views in Seattle.

“I enjoy the outdoors and hiking, camping and snowboarding,” says Doherty. “If you haven’t been to Pacific Northwest before, I highly recommend a day trip to hike the trails of Mount Rainier.”