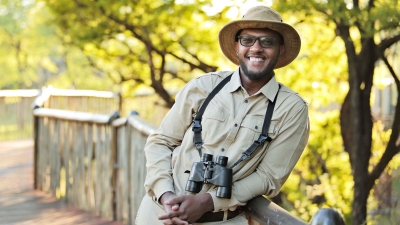 “If you have a thirst for knowledge, you couldn’t ask for a better classroom in which to learn than the Serengeti.”

Curious at heart, Ahmed Attas is right at home as Manager of the Discovery Centre at Four Seasons Safari Lodge Serengeti. His first steps on the career ladder set the tone for what was to come, as he took a position as an assistant mountain guide to lead hiking tours to the top of Africa’s highest mountain, Mount Kilimanjaro. “My home town of Moshi is the closest town to Mount Kilimanjaro. I grew up looking at its slopes and its snow-capped summit piercing the sky above. When you have such inspiration on your doorstep, it is hard to not to want to go out and explore.”

And onwards and upwards he went. The desire to learn more about Tanzania’s famous wildlife saw him transition into becoming a safari guide. Seeing the animals in their native habitat and witnessing the scale and diversity of wildlife populations that could be found across the region, Attas decided he would embark upon further studies to broaden his knowledge. “While working as a safari guide, I first enrolled to complete a Certificate in Wildlife Management, but soon realised there was so much more to learn. I continued on to complete a Diploma in this same subject, but even then I was not satisfied! In the end, I made the decision to commit to full time education by enrolling for a Degree in Wildlife Sciences and Conservation in Dar es Salaam.”

For almost a decade after completing his degree, Attas worked across various safari guide and camp manager positions, both in the Serengeti National Park and game reserves. “The more time I spent in the bush, the more I took appreciation of not only the wildlife, but also the nature. At the lodge I was managing in 2011, I started my first role as a nature guide and it was always such a thrill to see the reactions of guests when they discovered insights on how the ecosystem works and supports both the animals, and in turn, us.”

In 2015, Attas was presented with the opportunity to join the Tanzania Wildlife Management Authority (TAWA) to oversee their photography and wildlife division, which allowed him to combine his interests in animals, conservation and nature, all while gaining a new approach through the lens of photography. And now, as he oversees the Discovery Centre, it seems he will have an avenue for every skillset he has acquired on his journey. “The Discovery Centre is such a key component of the Lodge. It holds wealth of information and is also the home of the works from visiting wildlife photographers. It is the link to various community and sustainability projects supported by Four Seasons and, I am happy to say, it is my office!”