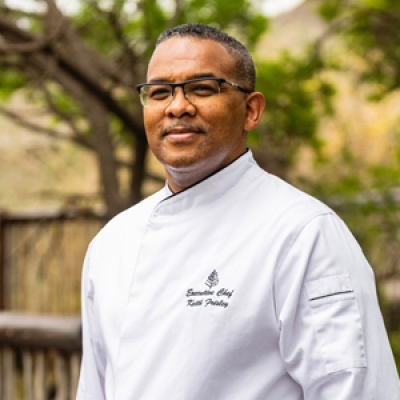 “When cooking, there can be no better option than using the best of what is naturally available.”

Growing up with a passion for engineering, Keith Frisley was all set to begin an internship at Mercedes when he took a part time job that changed the course of his life forever. “I started a part time job earning some pocket money on the mainline trains in South Africa,” says Keith, “and what I discovered was more than I could ever have imagined. These luxurious train-hotels gave me my first real insights into the world of hospitality – the buzz of service, the structured processes of operations and the joys of meeting new people every single day and exchanging stories.”

Keith’s time on the trains not only opened his eyes – and heart – to an entirely new industry, but allowed him to see so many areas of the country he had never previously visited. It was also what sparked his love of sourcing the best ingredients from nature to bring to his dishes. “No matter what dish you seek to create, it’s important that you remain true to your product and for that there can be no better option than using the best of what is naturally available.”

Originating from a family that carries strong military heritage, he found an instant connection with the discipline of the culinary world and it is this inherent commitment and focus that have been so fundamental in his success. In Johannesburg, Keith has worked at a number of the city’s five-star hotels, including Four Seasons Hotel The Westcliff, where he worked alongside Michelin starred Chef Dirk Gieselmann. The inspiration gained from working under a number of acclaimed mentors certainly rubbed off on Keith, with him going on to achieve numerous local and international award wins, including being a double gold winner as part of the Johannesburg Culinary Team in Austria 2000 and a member of the national culinary squad of South Africa.

In his 25-year career, Keith has developed a strong passion for developing not only his own skills, but those of his team. “My ethos is to strive to be a better version of myself each day, whether this is in bold achievements or routine tasks. This is what I share with my team and how I challenge them to develop themselves.” His unique blend of flair, creativity and passion for the product, with a strong sense of business and engaging interpersonal skills drives him to always be in search of perfection for both food quality and service.

Now finding his home in the remote beauty of the Serengeti, Keith has an even greater appreciation of nature. “I find it mind-blowing to think that even when so far away from everything, we are able to create incredible culinary experiences that will live on forever in the memories of our guests. To have chance to be part of that is very special.”

The only thing to challenge Keith’s love for cooking is his family, his wife Antoinette, daughter Nicole and son Kaylin, who he is certain are the true reason for his success, thanks to their unwavering support and the inspiration they bring him.