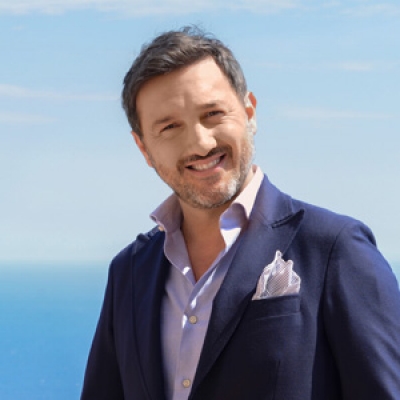 “The property has layers upon layers of history, but it’s a brand new hotel with fresh energy and all the details desired by contemporary travellers. It’s quintessentially Italian, yet also completely international.”

There are other hotels in Sicily with spas, multiple restaurants, beach clubs, and water views, but there’s only one San Domenico Palace, Taormina, A Four Seasons Hotel. “Our amenities have a soul and character that can’t be replicated,” says Lorenzo Maraviglia, who arrived as General Manager while the historic property was in the midst of an extensive renovation for its debut as the company’s third Italian address. “The property has layers upon layers of history, but it’s a brand new hotel with fresh energy and all the details desired by contemporary travellers. It’s quintessentially Italian, yet also completely international.”

Located in the hilltop town of Taormina on the eastern shores of Sicily, San Domenico Palace features multiple terraces looking out onto the Bay of Taormina, the Ionian Sea, and hot-tempered Mount Etna, the last a UNESCO World Heritage Site. There are full sea views from three-quarters of the Hotel’s 111 rooms and suites as well, each of which features original architecture and a distinctive layout. “We’re not one of those places where once you’ve done one floor, you’ve done them all,” says Maraviglia, who played a role in naming them. “The rooms are so diverse, they were a challenge to classify.”

With his extensive experience at openings, including a Le Cirque in Mexico City and luxury hotels in Beijing and Dubai, Maraviglia was the right GM at the right time in Taormina. Comprised of a Dominican convent dating from 1373 and a grand hotel wing that was added in 1896, the San Domenico Palace has 700 years of history and 220 art pieces that must remain onsite, including an ancient stone holy water font unearthed during the digging of a new swimming pool. “They found it the month I arrived, and we had to continue the excavation with a spoon,” he recalls, laughing. “It cost us two months!”

Much of Maraviglia’s energy is spent on being a brand ambassador for Four Seasons in Sicily and southern Italy beyond. There are many fine and established boutique hotels in Taormina, but Four Seasons superior product is drawing other brands, he says. “I’m very happy to have competition because it helps the destination and makes us try harder.”

Meanwhile, Maraviglia’s priority in his first-ever turn as GM is to grow the talent and inspire the hospitality of the Hotel team. The role of the leader, he says, is not to take care of guests, but to take care of those who take care of guests. “My job is to be a guide and a cultural carrier for the company, to inspire people to discover why our guests have certain expectations and why Four Seasons does what it does for them.”

The roots of Maraviglia’s career go back to his youth in Tuscany when he befriended the sons of Sirio Maccioni, the late, legendary restaurateur behind Le Cirque in Manhattan. Longing to experience New York City and hone his English, Maraviglia landed a job as a waiter and focused on customer care while studying hospitality management at a local university. He returned to a five-star hotel in Milan; relocated to Beijing as a restaurant manager on the opening team of a luxury hotel in the financial district; and later received a call from fashion designer Giorgio Armani with an offer to lead food & beverage operations for the opening of a property in Dubai.

At last, in 2015, Maraviglia found a home with Four Seasons overseeing F&B at the Jumeirah Beach property in Dubai. He was later promoted to Hotel Manager of Four Seasons Hotel Dubai International Financial Centre, his last stop before Taormina.

“Being back in Italy is closing the circle for me,” he says now, noting that he promised himself he wouldn’t return to work in his home country unless he was a GM. “It can be difficult to get promoted in Italy, and the essence of being a hotelier is mobility. I’ve always moved around to move up, but also to satisfy my curiosity about other cultures.”

Now feeling right at home in his native culture, Maraviglia enjoys scooting through Taormina to work each day on his black 1962 Vespa decked out with a new leather seat and spare wheel cover to match his riding gloves. “There is nothing unusual about a Vespa here, but I used to get a lot of attention in Dubai,” he remembers. “Locals would pull up next to me at a stoplight and throw offers – ‘I’ll give you $8,000! $10,000! $12,000.’ I’d just smile and say, ‘Not for sale.’”