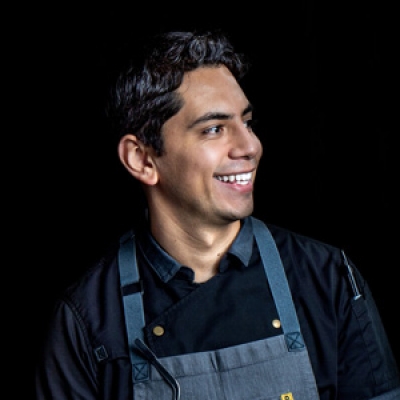 Chef Jesus Medina credits his initial curiosity for the culinary arts to his beloved mother. Chef Jesus recounts memories from his childhood of his mother expertly creating traditional Mexican cuisine in the kitchen of their home south of the border. It is this meaningful time with his mother that has given him the drive to pursue a diverse culinary journey, eventually leading him to the helm at Coin & Candor.

Chef Jesus' classic training began in 2006 where he earned a Bachelor's degree in Culinary Arts at the Laureate International Universities in Saltillo, Mexico. Following culinary school, he spent one year in the bustling food-centric city of Sao Paulo working in restaurants and mastering the fine dining experience. Chef Jesus then returned to Mexico to work in the Riviera Maya at the Barcelo Maya Palace as line cook. Developing an interest for life on the water, Chef Jesus pursued a position as line cook aboard the Royal Caribbean international to work in the ship’s French fine-dining restaurant across the Mediterranean seas for a year. His Latin roots inspired him to disembark the cruise ship in Barcelona, Spain, and spend a year working in classic tapas and Mediterranean restaurants while developing an acute understanding for the Spanish culture and cuisine. Upon his return to Oaxaca, Mexico in 2011, Chef Jesus learned from one of the best in the country while at the acclaimed CASA OAXACA under the internally recognized Chef Alejandro Ruiz.

Chef Jesus’ career with Four Seasons began in 2012 when he joined Four Seasons Resort Scottsdale and later Four Seasons Resort Punta Mita. He moved to Westlake Village in 2016 and has been embracing the Southern California seasonality of farmers and purveyors with bold, unique, ingredient-driven dishes. During his time in California, Chef Jesus has developed a vast array of original dishes inspired by his roots yet reflective of the coastal California cuisine. In his spare time, Chef Jesus likes spending quality time with his wife and friends over a good meal and great conversations. When not in the kitchen he is often seen running outdoors or mingling with local farmers at the Westlake Village Farmers’ Market.