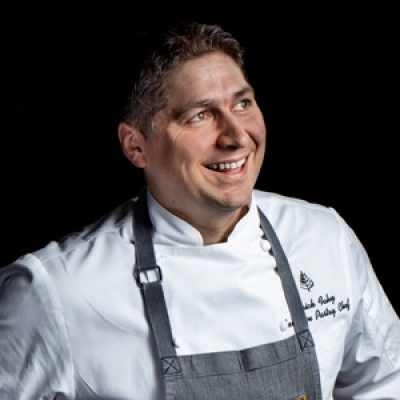 "Pastry is elegant; it is a luxury. It's a finale to an evening and the last impression left on a guest. It's celebratory and I love how it bring happiness and excitement."

Chef Patrick hails from the critically acclaimed Thomas Keller destination restaurant The French Laundry, which most recently earned the Michelin Guide San Francisco's highest rating of three stars for the sixth year in a row. At The French Laundry, Chef Patrick was the Head Pastry Chef responsible for the dessert and mignardises program, and regularly collaborated with Keller’s other restaurants including Per Se, Bouchon, Bouchon Bakery, Ad Hoc and Ad Lib.

As executive pastry chef of Trump International Hotel and Tower Chicago, Chef Patrick led the restaurant Sixteen to earn two Michelin stars in 2013. At Blackbird restaurant Chicago, Chef Patrick was a James Beard Finalist for Outstanding Pastry Chef in 2011 and a Semifinalist in 2012 and 2013. He has also worked in the pastry kitchen at The Ritz Carlton Chicago (formerly a Four Seasons Hotel). It was here where Chef Patrick was introduced to the art of fine dining pastry and developed a passion for becoming a top-rated pastry chef.