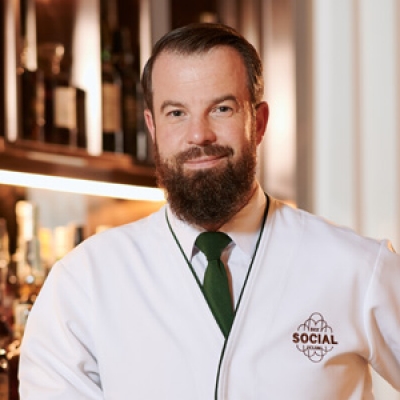 “Hospitality is not a 9-5. It’s about mutual respect and the understanding that serving is something great. Making people happy makes me happy. Bartending was my way into this amazing industry.”

Born in Berlin, Germany, Philip Bischoff’s first foray into bartending came at the age of 23. He began learning mixology at catering events, then honed his craft behind the bar at nightclubs.

“Bartending, for me, is all about passion. I discovered mixology at a young age and found myself really liking it. I also enjoy being the person behind the bar, being a part of creating special moments in other people’s lives. That’s what made me go into this 100 percent,” says Philip.

By the age of 27 Philip was turning out cocktails at Le Lion – Bar de Paris, which was awarded the Best New International Bar at Tales of the Cocktail. He was also at the helm of Amano in Berlin when it earned the prestigious title of Best Hotel Bar and Bar Team at the Mixology Bar Awards in 2013.

In 2015, Philip joined the award-winning Manhattan at Regent Singapore (formerly a Four Seasons hotel), as Bar Manager. He played a key role in setting up an in-hotel rickhouse to expand the menu, introducing signature single-cask cocktails and a selection of handcrafted solera-aged Negronis. He was also instrumental in launching the Manhattan’s American Whiskey Embassy Program in 2017, which shone a spotlight on unique spirits from the United States. In addition, Philip spearheaded the Friends of Manhattan Series, an initiative to encourage collaborations between industry partners, guest distillers and bartenders from around the world, offering a platform for trade professionals and cocktail aficionados to share their knowledge and passion for the craft.

The fruits of his labour were indeed sweet as Manhattan claimed the number one spot in Asia’s 50 Best Bars for two consecutive years and was named among the world’s top three bars in the World’s 50 Best Bars list.

When asked about his success, Philip says, “At the end of the day, it comes down to the overall experience at the bar – the drinks are part of a bigger picture. You’ve got to understand the vibe and tune in to people’s preferences. It isn’t just about getting the cocktails right. It’s as much about the ambience, the service, the people and the food.”

Along with cycling, diving and great food, Philip also loves travelling. “I love to go to new places and meet new people – it’s what inspires me. And Asia, especially Bangkok right now, is the place to be to get things started,” he says. “Bangkok is putting its stamp on the world cocktail map, and I want to be right at the heart of it all – at the forefront of global mixology innovation and craft.”