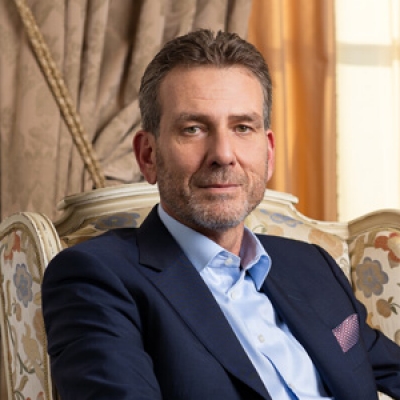 “There are a lot of beautiful stories to be told about Four Seasons Hotel des Bergues Geneva.”

“There are no under performers here,” says Martin Rhomberg, praising those that deliver the five-star experience of Four Seasons Hotel des Bergues Geneva. Appointed General Manager in spring 2016, Rhomberg stepped into the landmark address overlooking Lake Geneva – the first and best hotel in the city, dating from 1834 – to lead a team notable for its high qualifications, technical skills, education, worldliness and genuine care. “I still do the interviews to ensure that we get people with the right attitude who know how to interact with our guests. The qualifications I see make my job a lot easier.”

Rhomberg was drawn to Geneva by desire, shared by his family, for a change of scene – something that he has seen a lot of over a peripatetic Four Seasons career that has taken him to leadership positions on four continents. He was the right choice at the right time for a hotel in need of new leadership, with ownership seeking a senior manager who could deliver changes in the right fashion. “I was fortunate to fit right into what the owners and Four Seasons were looking for.”

Among attributes that impressed was Rhomberg’s strong food and beverage background, which he put to good use for the recruitment of a new chef for Il Lago, the Hotel’s Michelin-starred dining experience. Rhomberg considered seven top-level chefs in a search that took him through Hong Kong. He “tasted and tasted again,” but couldn’t quite find the talent he was after. “I was looking for someone who could deliver truly memorable food reflective of the restaurant’s Michelin-starred status,” he recalls. “Good service is one thing. But the quality on the plate must be such that you would recommend it to a friend. That was the criteria.”

Finally, he found the quality he was hungry for, appointing a young talent to the role of Executive Chef. There are essential elements of several signature dishes at Il Lago, such as the risotto or agnolotti, that must be maintained, says Rhomberg. “But I told him, ‘Do what you want with the rest of the menu,’ and he did.”

There were other enhancements for Rhomberg to consider following his arrival in Geneva, including the refurbishment of accommodations and employee areas, upgrading the housekeeping program, and being more assertive about marketing and sales. “Even when you are blessed with business, there is no minimising the importance of good communication,” he says. “There are a lot of beautiful stories to be told about this Hotel.”

Growing up in Austria, Rhomberg originally considered following in his father’s corporate footsteps or pursuing a medical career, but found that his heart wasn’t in either. “So I was chatting with my parents one day and they suggested tourism. I said, ‘Hey, why not?’” Off he went: Not to the grand palace hotels of Europe, but to an uncle’s wellness resort in the Austrian Alps where he ground out 16-hour days on the hotel floor. “I loved every minute of it,” he recalls. “The idea that you can make a guest’s day with a small gesture and be surrounded by beautiful things was so appealing to me. Most people never have a chance to experience a world like that.”

He was in the right place at the right time to hook up with Four Seasons, having led the Park Hyatt in Buenos Aires as hotel manager before the company reflagged it. He would’ve been happy there – “My focus was always on providing quality service, and when I looked around Four Seasons was the one company in the luxury segment that was engaging guests the way I always wanted” – but instead the company offered him a slot as opening Food and Beverage Director at another property in South America. “They wanted to see if I could perform within their corporate culture. I took the offer without hesitation.”

Eight years later, he was appointed General Manager in Damascus. And three years after that, in spring 2011, he opened the company’s first Russian address in St. Petersburg. The challenge there was finding talent to deliver the Four Seasons experience at a time of zero unemployment in the city. “In hindsight, the biggest factor behind our success in St. Petersburg was that I knew exactly what I wanted that Hotel to be: all about the guest.”

Now settled into Switzerland, Rhomberg is excited to be leading one of the most important properties in Four Seasons global portfolio while also savouring his 2017 promotion to Regional Vice President. “This is a high performing asset with a dedicated customer base not unlike that of Four Seasons Hotel George V in Paris,” he says, noting the ability of the Geneva hotel to generate revenues and gain a bigger share of the pie on the local hospitality scene. “What I love best here is being in the lobby watching the guests come in to dine and stay. The arrival experience is very special – just like home.”