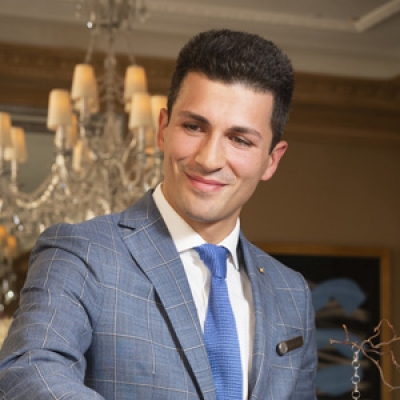 “Part of being a sommelier is developing good relationships with customers. Then I can say, ‘Why not try this one I just discovered a few days ago,’ and turn them onto something new.”

You can’t go home again goes the old saying. But apparently you can go back to the wine cellar as Chef Sommelier of Four Seasons Hotel des Bergues, Geneva. Just ask Salvatore Salerno. “I started here in 2010 as a Commis-Sommelier. It was a lot of hard work, but an excellent experience. I learned so much about service and customer expectations.”

And now? “Completely different. Wine is a much more prominent part of the food & beverage program now. As Chef Sommelier, I’m not just choosing wines to match the menus; the chefs are taking inspiration from the wines.”

Salerno oversees a wide, rotating, and still-growing selection of the Continent’s best offerings, with notably high-end selections geared to the dining experiences at Michelin-starred Il Lago, rooftop Izumi, and Le Bar des Bergues. He may mind anywhere from 1,500 to 2,000 labels at any time, most of them from France, Italy, and Switzerland, but also from Portugal, Germany, and Spain, as well as the U.S. and South Africa. The stock vastly outnumbers the 200 or so labels the cellar held when he first worked at the Hotel, and it’s a good bit above the 1,200-or-so labels when he re-joined in summer 2019.

Salerno endeavours to keep the wine selection interesting beyond the standouts, peppering it with, as he puts it, “things people should try that go outside of the standards they have already experienced.” He mentions, for instance, an Etna Rosso “from a small estate in a very small region of Sicily,” which he believes pairs well with something from Il Lago like veal chop Milanese style or duck confit with sun dried tomatoes. “It’s a very interesting bottle that I think people can appreciate as much as something renowned.”

Are clientele generally inclined to reach out for something new? It all depends, he says. “If they’re in a business mood, they often just want what they know. But part of being a Sommelier is developing good relationships with customers. Then I can say, ‘Why not try this one I just discovered a few days ago,’ and turn them onto something new.”

There is more than wine to drink at Hotel des Bergues, of course. Le Bar des Bergues has a vibrant menu of signature cocktails built by the creative team behind the bar. Izumi offers a wide selection of sake to complement its Japanese-fusion Nikkei cuisine. And if beer, water, or coffee is your preference, Salerno’s knowledge of each runs deep.

Born in Palermo on the island of Sicily, but raised in the Italian style capital of Milan, Salerno can’t recall what initially attracted him to food & beverage, but he knew from the start the way that the way to approach his career was to represent restaurants the best way he could.

He has had great success with representable employers, landing at Michelin-starred restaurants in Lyon, Monte Carlo, and Paris, as well as on an estate in a garden city outside of London. Immediately prior to re-joining Hotel des Bergues, he spent a couple of years leading the wine program at a Michelin-starred restaurant in Geneva run by a former Four Seasons chef. “We a great relationship, but I really wanted to take on more responsibilities.”

Taken together, Salerno’s wine knowledge is now nothing short of impressive: Enough to earn him Best Sommelier of Italy 2014 from the Italian Association of Professional Sommeliers (ASPI). “Very intense,” he remembers of the competition held in Trento, Italy, with three days of tests, demonstrations, blind tastings, and pairings, including of cigars, coffee, water, and beer. More recently, he won the 1st One Belt Road Champions Sommeliers Summit and Competition held in Ningxia, China, in 2018.

Now right back at home with Four Seasons, Salerno enjoys boxing at the gym in his downtime, as well as taking his two kids to parks along Lake Geneva. Meantime, he recalls his good fortune at having a mentor who led him to make the right choices early in his career. “I try to do the same thing at the restaurants here, to motivate our younger team members who are just getting started. There are so many ways for them to excel.”