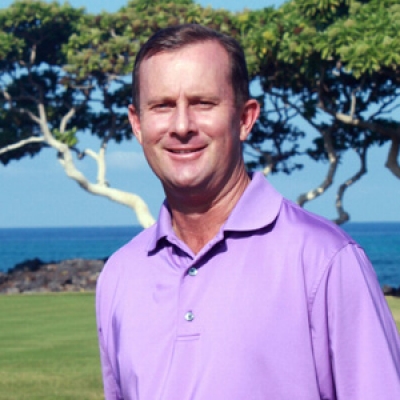 "One of the many great things about playing golf here at Hualalai is that it's suited for anyone - from the casual resort golfer all the way up to the pros. Add in some whales and dolphins just off your tee shot, and it can be a day you'll never forget."

"One of the many great things about playing golf here at Hualalai is that it's suited for anyone - from the casual resort golfer all the way up to the pros. We're unique in that respect, and it makes for an amazing day on the course - add in some whales and dolphins just off your tee shot, and it can be a day you'll never forget."

Originally from Oahu, Brendan comes from a golf family.  His father, Michael Moynahan, is a Master Club Maker and is well known for his charity golf tournaments in the State of Hawaii for more than 40 years.  Brendan grew up in a golf town, in a golf family – he was destined to be a golfer.

As a graduate of Punahou High School, Brendan pushed himself to be the best in his sport.  He attended Menlo College and then transferred to the University of San Francisco as a member of the golf team.  His hard work and commitment to the sport earned him All-Conference accolades within the West Coast Athletic Association.  He also represented Hawaii in the US Amateur Golf Tournament in 1987 and 1989.  After turning professional in 1991 Brendan won 10 Aloha Section PGA tournaments and represented Hawaii eight times in the PGA Club Professional Championships.

Brendan became an associate and teaching golf professional at Kapalua Golf Resort on the island of Maui, upon his return to the Islands, earning more accolades, such as the Maui Golf Magazine Player of the Year award in 1997 and Assistant Professional of the Year in 1998 by the Aloha Section of the PGA.  He then moved to Lanai and became the head golf professional of the island’s two esteemed courses.  In 2005, Moynahan returned to Hawaii Island, where his family resides, assuming the role of Head Golf Professional at Hualalai Golf Club.  In 2009, he was promoted to his current position as Director of Golf. In February 2020, Moynahan was selected as Aloha Section PGA Golf Professional of the Year for his years of dedication to golf in Hawaii.

Married since 1997 to Anne Marie, Brendan has two children: Brendan Joseph and Catherine Malia.  He enjoys spending time in the ocean on his off time, boogie boarding or body surfing.  He also coaches his son’s soccer and baseball team and enjoys drawing, which helps him relax and keep his hand-eye coordination in top-form.