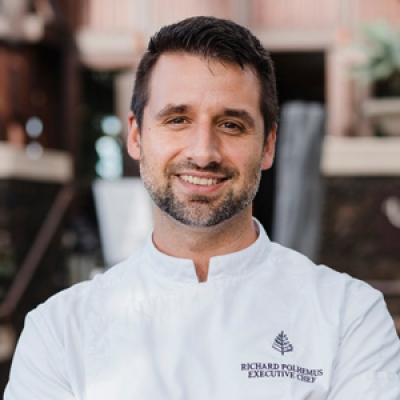 “My entire career has been grounded in a farm-to-table approach, I’ve always let nature and seasonality guide the creation of my menus. Using local ingredients, curating relationships with purveyors, and embracing the skill of butchery and the nose-to-tail approach has been key to my culinary philosophy."

Chicago was always home for Chef Richard Polhemus, and after graduating from Kendall College with an Associates Degree in Culinary Arts and Applied Sciences, he was hired by Four Seasons Hotel Chicago. Working his way up the ranks at the famed Hotel, Polhemus was eventually promoted to Sous Chef after working in nearly every culinary position at the Hotel.  At Four Seasons Hotel Chicago, Polhemus opened Allium Restaurant, a farm-to-table American restaurant with strong ties to local farmers and purveyors. Allium was later awarded one Michelin star.

In 2016, Polhemus left Chicago to join Four Seasons Resort Oahu at Ko Olina where he was promoted to Executive Chef shortly thereafter. During his time on Oahu, Polhemus embraced local cuisine and culture. He spent hours visiting local farmers and talking to members of the Hawaiian culinary community.  Polhemus is consistently impressed and pleasantly surprised by Hawaii’s diversity and the abundant island ingredients available to him.

The Island of Hawaii beckoned him in 2020 when he accepted the position as Executive Chef of Four Seasons Resort Hualalai, overseeing the Resort’s extensive culinary program including five dining outlets, in-room dining, special events, and Hualalai Club. Polhemus brings his years of farm-to-table passion to the Five-Star, Five-Diamond Resort, where 75 percent of the ingredients used are from Hawaii Island and are sourced from more than 160 farms. He understands the importance of and embraces the nuances of working with the local farmers and purveyors who provide distinctly Hawaiian ingredients to the Resort. Polhemus is also working with the Resort’s expert landscaping team to foster the on-site herb garden, supplying various fresh herbs and vegetables, and carefully created pond, home to two types of oysters and shrimp, to ensure the utmost hyper-local experience.

When he is not in the kitchen, Polhemus lives an active outdoor lifestyle, and enjoys exploring the diversity of the hiking in Hawaii. Food and wine are true passions, and Polhemus spends much of his free time expanding his knowledge on new culinary trends and cuisines.